Boeing's 737 Max cleared to fly in the US after crashes 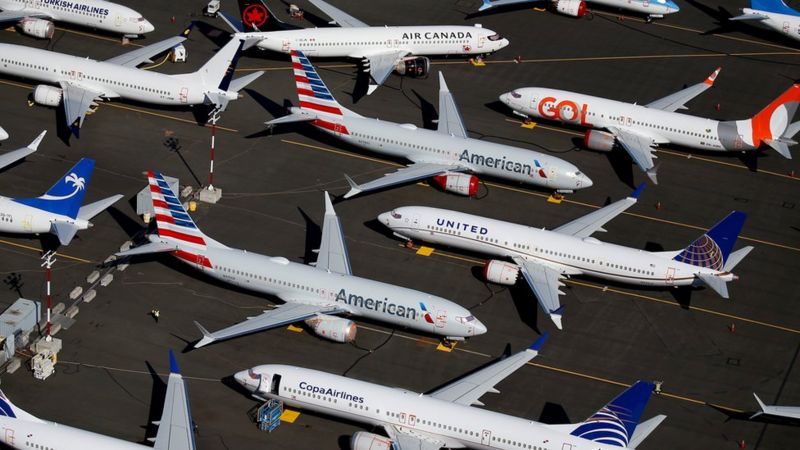 The move marks a key milestone for the firm, which was thrust into crisis by the tragedies and investigations that blamed it for the accidents.

Its financial woes deepened this year as air travel slowed due to the virus.

Existing aircraft will need to be modified before going back into service, with changes to their design.

Safety regulator, the US Federal Aviation Administration (FAA), said the clearance would not allow the plane to "return immediately" to the skies.

Alongside the software and wiring changes, pilots will also need training.

The FAA said the design changes it had required "have eliminated what caused these particular accidents".

The boss of the FAA, said he was "100% confident" in the safety of the plane.

"We've done everything humanly possible to make sure" these types of crashes do not happen again," Steve Dickson said.

The approval comes roughly a year after Boeing had first hoped but too soon for many of the victims' families.

Boeing and the FAA insist it will be - and certainly the direct cause of the accidents has now been fixed. Pilots and safety experts seem confident that the changes made to the plane will be effective.

But both Boeing and the regulator still have much to prove.

For Boeing, that the scathing criticisms of its corporate culture have been addressed, and that safety really is, as it often claims, its number one priority.

For the FAA, that it can stand up to the aerospace giant and recover from the failures that allowed a deeply flawed plane into service, resulting in tragedy.

The aircraft is coming back, but the world has changed. It was designed for a booming market, in which airlines desperately needed new planes and in which high fuel prices put a premium on efficiency.

Now, the aviation industry is on its knees thanks to the Covid crisis. It's no surprise then that some airlines have been cancelling orders.

However, the industry looks to the long term. Air traffic will ultimately recover, and pressure to keep costs down will return. Environmental pressures are only going to grow.

Presentational grey line
The US is the first to reverse the grounding orders, which hit the firm around the world in March 2019. European aviation officials have said they are close to making a similar decision.

Crashes
The crashes in Indonesia and Ethiopia came within five months of each other and together killed 346 people. They have been attributed to flaws in automated flight software called MCAS, which prompted the planes to nosedive shortly after take-off.

A US congressional report last month said Boeing's rush to production, a decision to ignore internal safety concerns and concealment of key changes to the plane, including pilot training needs, contributed to the accidents.

It also faulted the FAA for oversight lapses, including "excessive delegation to Boeing".

Boeing has estimated the cost of the grounding at roughly $20bn.

Before the crashes, Boeing churned out more than 50 of the popular 737 Max per month. But airlines around the world have cancelled and delayed orders due in part to the pandemic.

Last month, Boeing said it did not expect its production rate to top 30 planes a month until 2022. It warned investors of a backlog of about 450 737 Max planes, of which only about half of which would be delivered by the end of next year.