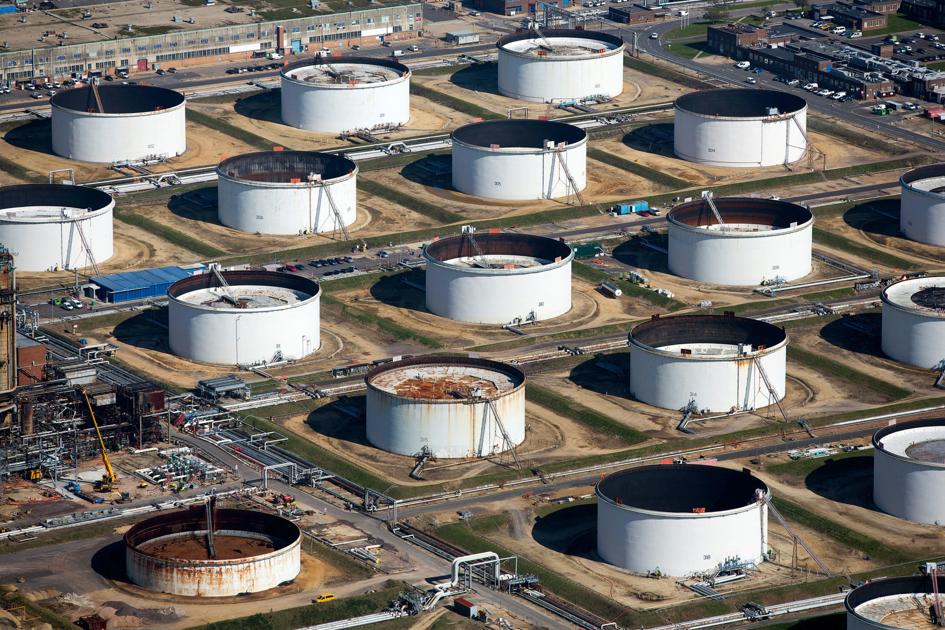 ExxonMobil used to have bragging rights as the world's most valuable public company. Now, America's largest oil company is in steady decline.

A stunning $184 billion has been wiped off Exxon's market valuation since its 2014 peak. That's equivalent to the entire value of Boeing (BA), or nearly1.5 Teslas.

Exxon's stock plunged to nine-year lows Tuesday after posting dreadful results that suggest a turnaround is unlikely any time soon.

The oil giant's recent struggles are driven by a confluence of unfortunate factors -- none of its major businesses are firing on all cylinders. Oil prices are in a bear market. Natural gas is dirt cheap. Margins in Exxon's massive chemical business have crumbled. And refining is under pressure, too.

Bigger picture, Exxon's shrinking market value is emblematic of the broader problems facing Big Oil -- even as the United States has been crowned the world's leading producer of both oil and natural gas. The shale revolution has left the world brimming with oil and gas, so much so that prices have been depressed.

"Sentiment towards oil companies is as bad as it's been in a long, long time," said Ben Cook, a portfolio manager at BP Capital Fund Advisors.

The energy sector of the S&P 500 was easily the biggest loser over the last decade, generating a total return of just 34%, according to Refinitiv. The next closest sector, materials, climbed five times as much in that same timeframe.

That decline also reflects the world coming to grips with the climate crisis. Energy stocks are in the penalty box because of heightened concerns about carbon emissions and the rise of socially-conscious investing.

"Fossil fuels have a PR issue," said Cook. "As long as the market perceives them to be the culprit for carbon emissions, they will have a difficult time."

Exxon was late to the shale boom

Exxon's decline is stunning considering it was the world's most valuable company as recently as 2012, the year it was dethroned by Apple (AAPL).

Yet Exxon made some investment decisions that, with the benefit of hindsight, look poorly-timed. In 2009, it agreed to spend $41 billion to buy natural gas behemoth XTO Energy. That takeover backfired badly tas natural gas prices plummeted.

And Texas-based Exxon was late to capitalize on the shale oil boom that took place in its own backyard. Like other oil majors, Exxon focused instead on expensive and long-term drilling projects overseas rather than fracking in North Dakota and Texas.

Today, Exxon is valued at about $262 billion, well behind companies including Visa (V), Procter & Gamble (PG) and Walmart (WMT) as well as the $1 trillion valuations sported by Apple, Microsoft, Alphabet and Amazon. Saudi Aramco, the crown jewel of Saudi Arabia, went public last year with a valuation of $1.7 trillion.

Not surprisingly, Exxon's market value topped out at $446 billion in mid-2014 when oil prices were above $100 a barrel. Since then, the company has lost $184 billion, or 41%, of its value. By comparison, the S&P 500 spiked by 72% over that timeframe. And Apple's market capitalization has nearly tripled to $1.35 trillion.

Again, Exxon is hardly the only oil company struggling these days. In 2008, when oil prices spiked above $140 a barrel, the energy sector comprised 16% of the S&P 500, according to Bespoke Investment Group. Now, energy accounts for less than 4% of the benchmark index.

Yet Exxon's recent stumbles suggest it is more out of favor than some of its peers. For instance, while Exxon stock plunged to the lowest level since August 2010, rival Chevron (CVX) is merely at a 14-month low.

Morgan Stanley told clients in a note Monday that it prefers Chevron because Exxon is "most exposed" to negative headwinds in the industry, including oversupply in oil, natural gas and liquefied natural gas.

Goldman Sachs slapped a "sell" rating on Exxon this week and slashed its price target to $59 from $72.

"We do not see a compelling case to own XOM relative to other energy stocks with more attractive returns profile," Goldman analyst Neil Mehta wrote.

Wall Street has pressured oil companies to hunker down by spending less and returning cash to shareholders. The goal is to avoid a repeat of the 2014-2016 oil crash, when prices plummeted 70%, driving dozens of oil companies into bankruptcy.

Exxon, backed by a stronger balance sheet than its peers, is taking the opposite approach. The company is spending aggressively on new projects to bolster its drilling prospects.

Early signs suggest that Exxon's spending is paying off. Production in the Permian Basin, the prolific West Texas shale oil field, has spiked 79% since 2018. And Exxon has discovered more than 8 billion barrels of oil in Guyana-- a find that led Rystad Energy to name Exxon its explorer of the year in both 2018 and 2019.

"We believe strongly that investing in the trough of this cycle has some real advantages," Exxon CEO Darren Woods told analysts during a conference call last week. "We have a very healthy balance sheet, which was built for times like this."

Exxon's beloved dividend is on 'crutches'

Yet even Exxon has limitations to how much it can spend, especially if it wants to keep paying the generous dividend that shareholders covet.

Lately, Exxon has had to rely on asset sales and borrowing to keep paying that dividend, which the company has proudly raised 37 consecutive years.

Exxon's "deteriorating financial conditions" required it to cover 64% of its dividend in 2019 with funds from asset sales and borrowing, according to a report by the Institute for Energy Economics and Financial Analysis. That's well above Exxon's 10-year average of 30%.

"The one thing that keeps investors tethered to companies like ExxonMobil is its quarterly dividend checks," IEEFA wrote in the report. "It is a dividend that requires crutches."

Some reliable dividend payers including General Electric, Kraft Heinz (KHC) and beer king ABInBev (BUD) have recently had to slash their dividends because of financial stress. However, analysts think Exxon's dividend is safe, at least for now.

"It would be unthinkable for Exxon to cut its dividend," said Pavel Molchanov, an energy analyst at Raymond James. "That would only happen in an Armageddon scenario."

Exxon has stressed its support for the dividend. Woods said last week that the company feels "very firmly that we've got a commitment with our shareholders to provide a reliable and growing dividend."

"Exxon has a target on its back," said Molchanov.

Exxon has not ignored this pressure. In last week's earnings call, the company highlighted its efforts to develop new, lower emissions technologies "to help address the risk of climate change."

"While renewables like wind and solar play an important role," Woods told analysts, "they don't solve the emissions challenge for every market, geography or application."

Last month, BlackRock, the world's largest asset manager, promised to ditch investmentsit considers to be a sustainability risk and double its offering of ETFs that track companies that meet environmental, social and governance (ESG) criteria.

"The market is beginning to place an 'ESG discount' on the cash flow stream for Big Oil companies," Morgan Stanley analysts wrote.

Investors want to put their money behind companies they see as clean energy solutions, like Tesla -- not companies viewed as part of the problem. That trend will likely broaden in coming years, posing a powerful obstacle for Exxon to navigate.