Next warns on outlook as sales fall 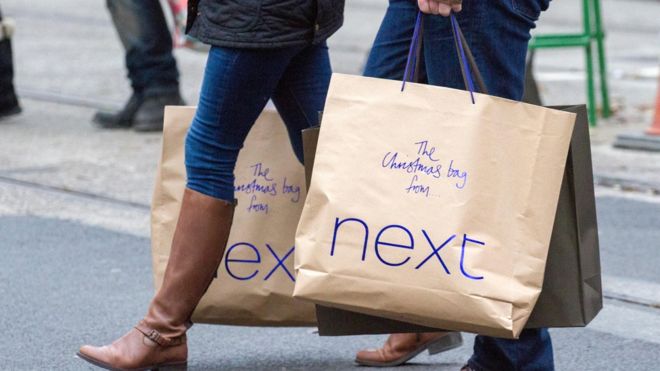 Shares in Next dived 9% as the retailer reported falling sales and warned the coming year would be "challenging".

The retailer said full-price sales fell by 0.4% in the 54 days to 24 December, with annual profits now set to be at the low end of expectations.

The firm forecast full-year profits would be £792m, compared with previous guidance of £785m-£825m.

Next said sales in 2017 could be hit as rising inflation erodes earnings growth and squeezes consumer spending.

The year ahead looks set to be another challenging year; therefore we are preparing the company for tougher times," the company said.

It said the price of clothing could rise "by no more than 5%" following the fall in the value of the pound last year. It added that this would "depress sales revenue by around 0.5%".

Earlier on Wednesday, a report from the British Retail Consortium (BRC) had also pointed to rising price pressures in the sector.

The BRC said the price of clothing and footwear increased in December compared with November, the first month-on-month rise in prices for nearly two years.

Next said that it was budgeting for full-price sales growth in the year to January 2018 within the range of a fall of 4.5% and a rise of 1.5%.

If it came in at the mid-point of a fall of 1.5%, that would be "marginally worse" than the current year's performance, it added.

Next is already predicting a fall in profits for next year, saying it expects to make between £680m and £780m.

However, the retailer said it was "well placed to weather a downturn in consumer demand".

Next's figures for the 54 days to Christmas Eve revealed sales in stores fell by 3.5%, while Next Directory sales rose by 5.1%.

In its statement, the company said despite a "difficult season" it went into its end of season sale with 3% less stock than last year, but it sold 7% fewer products than 12 months ago.

"Next took a gamble on keeping their sales full price in the run-up to Christmas, it's what they usually do, and they usually use the sales to try and get people into the shops afterwards," said Kirsty McGregor of Drapers magazine.

However, she said, that strategy did not seem to have paid off this year.

"I think what we're seeing there is an underlying move away from spending so much money on clothing and footwear. People seem to be spending more money on going out and on technology, things like that."

Next's trading statement acknowledged the "exceptional levels of uncertainty in the clothing sector".

The company, whose chief executive is the pro-Brexit Lord Wolfson, also said there was "little visibility of the approach the UK government will be taking to Brexit".

However, the fall in spending on clothing and footwear and the squeeze on consumer incomes are not the only problems facing Next according to Neil Wilson, senior market analyst at ETX Capital.

"The simple problem is that Next is underperforming the market," he said.

"UK retail sales have held up in the months following the Brexit vote but Next has suffered. It's been suffering for a while and needs a turnaround plan.

"The brand is struggling for relevancy and risks going the way of Marks and Spencer on the clothing front, appealing to an ever-narrower customer base."

Next's gloomy outlook for 2017 hit shares in other retailers, with Marks and Spencer, Debenhams and Primark owner Associated British Foods all trading lower.

However, there was better news from discount retailer B&M, which saw its shares jump 7% after it reported a big rise in sales in the run-up to Christmas.

B&M said UK like-for-like sales rose 7.2% in the three months to 24 December, while revenue across the group rose by more than a fifth to £789.1m.