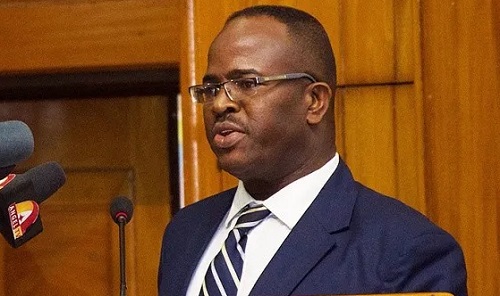 The mining sector could once again be the economy’s saviour, as gold prices continue to firm up in the face of a global economic crisis.

Price of gold, which is known to gain momentum during economic crisis as investors often consider it as safe haven, averaged US$1,866 per ounce between January and April 2022 from US$1,788 per ounce within the same period in 2021, with the Ghana Chamber of Mines expecting this positive price trend to continue.

This, coupled with expected higher output from large-scale gold miners according to the Chamber’s projections, means government could be in for a revenue windfall in what could be a huge boost in the face of tightening fiscal space, falling revenues from other sectors against rising expenditure.

“If the bullish price trend persists to end of the year,” says the Chamber’s Chief Executive Officer, Sulemanu Koney, “it will translate into increased fiscal receipts for the state.”

For starters, he said, mineral royalties to the state – which are positively correlated with the price of gold – will increase.

Moreover, Mr. Koney also expects corporate income tax to increase in response to the growth in price. Further, the price increase is also likely to make marginal mines profitable or make marginal ore-bodies viable to exploit. These developments will improve the fiscal revenue from the sector.

“Besides, growth opportunities in the sector will also accrue to the benefit of local suppliers and manufacturers in the form of increased demand for inputs.

“The mining communities will also benefit from the optimistic price outlook through increased corporate social investments. Lastly, some mines may expand their operations, and this would be associated with an increase in employment opportunities for the larger Ghanaian population,” Mr. Koney explained in written a response to questions by the B&FT on the price outlook for gold.

The mining sector was the leading source of direct domestic revenue at the COVID-19 pandemic peak in 2020, contributing GH¢4.17billion in 2020 to the national purse from GH₵4.01billion in 2019. Data on the sector’s contribution to national revenue for last year are yet to be made public by the Ghana Revenue Authority.

In terms of gold production, the Chamber expects a rise of 12.5 percent this year from large-scale producers – its member-companies.

Last year the large-scale sector produced 2.7 million ounces, but the Chamber is projecting an upturn of 3 million ounces in 2022.

Meanwhile, production forecasts for small-scale mining remain bearish, due to the effects of introducing a 3 percent withholding tax on gold exports a few years ago.

Although the tax has been halved, the CEO believes it will take time for the small-scale sector to respond.

Nonetheless, he said: “We are optimistic that the mining sector will consolidate its position as the leading source of direct domestic revenue”.

Ghana is Africa’s leading producer of the precious yellow metal and the world’s sixth-largest producer of gold overall.