The Telecom and IT Professionals Union, TIP has served notice to the National Labour Commission (NLC) and their employers that its members will embark on strike action on March 15 due to poor conditions of service.

The move by the union follows a deadlock in salary negotiations between the union and the management of the four sub-contractors (SBCs) who have been engaged by Huawei Technologies Limited to maintain the technical operations of MTN, AirtelTigo and Vodafone.

According to the workers, the four SBCs; Linfra Ghana Limited, MP Infrastructure Ghana Limited, Reime Ghana Limited and Reliance Personal Services, have refused to enhance their remuneration over the years despite the huge profits declared annually by the telcos and Huawei.

At the current salary negotiation by the Joint Standing Negotiation Committee (JSNC), which was meant to have taken place in September 2020, the Union proposed a 20 percent pay increase, but management locked its offer at 3 percent, after initially offering zero percent.

In a letter dated March 12, 2021, to inform the NLC and the SBCs of the intended action, the union explained that the four SBCs have failed to act in good faith in addressing the concerns of the workers, and therefore, the union â€œdo not wish to cooperate with management going forward until the workersâ€™ concerns are resolved.â€

â€œGiven the above facts and conditions, we respectfully write to inform you that our earlier industrial action is coming on the 15th of March 2021 as earlier planned,â€ said the letter signed by Israel Edem Agbegbor, General Secretary of the Union.

Ahead of the negotiations, the union had served Notice of Industrial Action to the National Labour Commission, following delays in the implementation of an arbitral award directing the management of the SBCs to collectively undertake a proper job evaluation and new salary structure to reflect standard industry remuneration.

But the NLC intervened and directed the SBCs to act on the concerns of the workers.

Israel Edem Agbegbor who confirmed the deadlock and the planned strike action, described the stance of management as extremely worrying and dangerous.

He said it is also demoralizing, considering the extraordinary effort and sacrifices the members put in throughout last year to ensure that telecommunications services are at their optimal performance for the three major networks operators (MTN, Vodafone and Airtel Tigo) were not interrupted during and after the peak of the COVID-19 pandemic where almost every company has to rely on the telecommunications services to work from home

According to him, although the union served notice on December 22, 2020, to embark on industrial action on January 2, 2021, it respected the Labour Commissionâ€™s intervention to stay action, expecting that the employer would honour its obligation to restructure the salary of workers.

â€œThey are using our category as essential services workers to exploit us without paying us rightly,â€ he said.

A few hours of sit-down industrial action by the union in October 2019 after a deadlock in negotiation almost crippled the countryâ€™s telecom operations.

As part of the Memorandum of Understanding to end the sit-down strike, management was required to undertake a job re-evaluation and salary restructuring, which it failed to do, and consequently led the parties to the Labour Commission which the Commission upheld in favour of the Union in an arbitration award on March 19, 2020.

The uncooperative posture of management, according to Mr. Agbegbor, continues to create tension at the workplace and dissatisfaction among the workers. 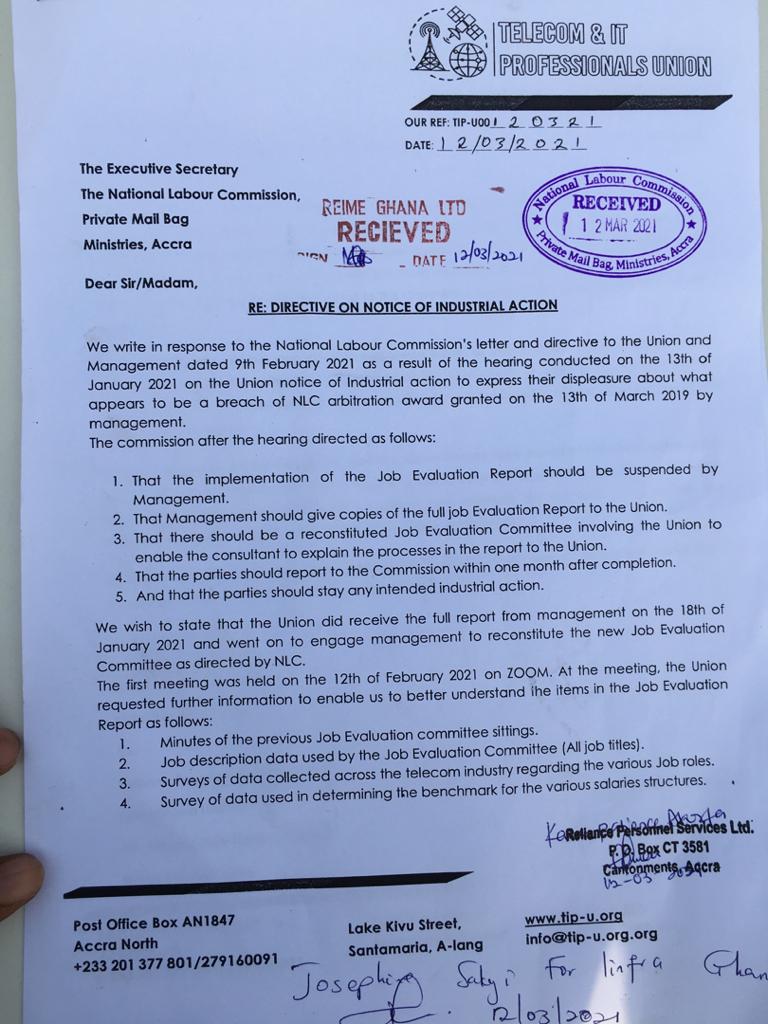 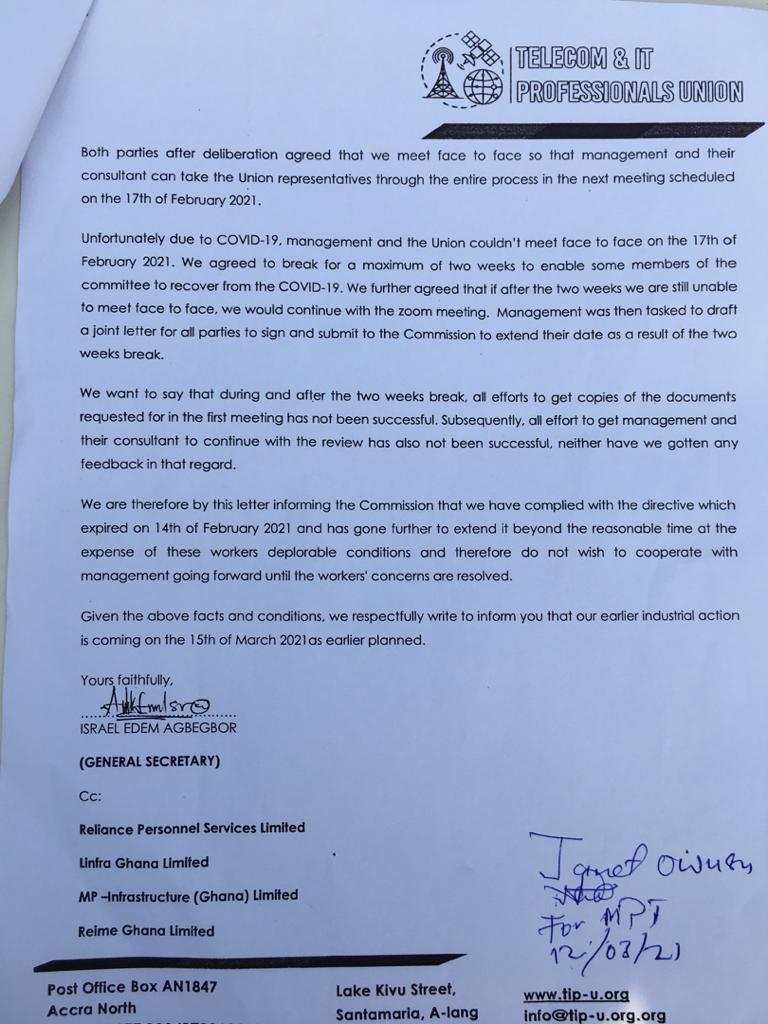