U.S. hikes tariffs on $200b of Chinese goods; China to retaliate 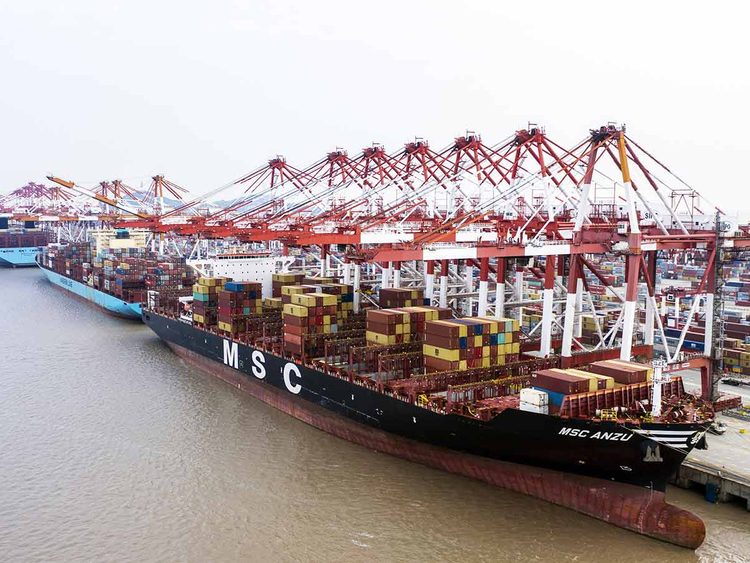 President Donald Trump boosted tariffs Friday on more than $200 billion in goods from China in his most dramatic step yet to extract trade concessions, further roiling financial markets and casting a shadow over the global economy.

China immediately said in a statement it is forced to retaliate, though hadn’t specified how as of 3:55 p.m. in Beijing.

The move came after discussions between President Xi Jinping’s top trade envoy and his U.S. counterparts in Washington made little progress on Thursday, with the mood around them downbeat, according to people familiar with the talks.

The negotiations were due to resume on Friday morning Washington time.

Asian stocks whipsawed in heavy trading. Chinese state-backed funds were reported jumping into the local market after shares slumped, and the Shanghai Composite closed up 3.1%.

S&P 500 futures were down in London trading, putting U.S. stocks –- a key metric of performance in Trump’s own analysis -- on course for the worst week since December.

The fresh wave of tariffs marked a sharp reversal from just last week, when U.S. officials expressed optimism that a pact was within reach.

Ahead of the talks on Thursday, Trump also said the U.S. would go ahead with preparations to impose 25% tariffs on a further $325 billion in goods from China, raising the prospect of all of China’s goods exports to the U.S. -- which were worth about $540 billion last year -- being subject to new import duties.

Such a move would take weeks to deploy. But it would have significant repercussions for the U.S., Chinese and global economies.

Economists at Moody’s Analytics said in a report this week that an all-out trade conflagration between the world’s two-largest economies risked tipping the U.S. economy into recession by the end of 2020 just as voters go to the polls in the U.S.

The world’s two largest economies will both get pinched. Bloomberg Economics calculates the new increase will raise the drag on Chinese growth to 0.9 percentage point from 0.5 percentage point.

The International Monetary Fund estimates the pullback on the U.S. expansion at about 0.2 point, and potentially more if there’s a blow to markets and confidence.

The new tariffs that took effect at 12:01 a.m. Washington time Friday raise from 10% to 25% the duties on more than 5,700 different product categories from China -- ranging from cooked vegetables to Christmas lights and highchairs for babies.

U.S. officials have said the new duties -- introduced on just five days’ notice -
will not apply to goods already on boats headed for American shores. A 25% tariff is already in place on a further $50 billion in imports from China.

Some American industries were quick to decry Trump’s decision, which will hurt some of his key political constituencies, including farmers and manufacturers.

The tariffs will “suppress job gains for the industry by as much as 400,000 over 10 years. It will also invite China to hit back at American businesses, farmers, communities, and families,” said Kip Eideberg, vice president of government affairs for the Association of Equipment Manufacturers.

Meanwhile, talks were expected to continue. Chinese Vice Premier Liu He huddled with U.S. Trade Representative Robert Lighthizer and Treasury Secretary Steven Mnuchin in Washington on Thursday for about 90 minutes of talks before breaking and reconvening later for a working dinner that broke up around 8:40 p.m. Washington time.

Though talks are set to resume Friday, some close observers said they were not hopeful for any meaningful breakthroughs. One person familiar with the discussions said that U.S. officials were unsure whether Liu had the authority to make any meaningful commitments.

It was also unclear whether China had resolved the internal debates that had led to last week’s rescinding of prior commitments to enshrine reforms agreed in Chinese law.

Ahead of the latest round of meetings, Liu told Chinese state media he was coming to Washington under pressure but “with sincerity” and warned that a move to raise tariffs by the U.S. starting Friday was not a solution.

Earlier on Thursday, Trump sought to calm U.S. financial markets after he insisted it was still possible to reach a deal this week, even as he reiterated plans to raise tariffs on Chinese goods.

Trump, speaking at an event in Washington, also said he may hold a phone call with his Chinese counterpart, Xi. No call between the two leaders had taken place by late Thursday nor had one been scheduled, according to a senior Trump administration official.

“He just wrote me a beautiful letter, I just received it, and I’ll probably speak to him by phone, but look, we have two great alternatives, our country is doing fantastically well,” Trump said. “Our alternative is an excellent one, it’s an alternative I’ve spoken about for years. We’ve taken well over $100 billion from China in a year.”

“The trade truce, one of the pillars on which optimism about global growth is based, appears to be crumbling. We’ll see how talks in D.C. go on Friday. Assuming there’s no speedy resolution and higher tariffs remain in place, forecasts for global growth will be shaded down, with the main blow landing on China and its Asian neighbors." – Tom Orlik, Chief Economist at Bloomberg Economics

China has disputed the U.S. characterization that the country reneged on prior commitments. But it has also sent its own signals that a deal could take time.

“There’s definitely disappointment and frustration” in China, said Zhu Ning, deputy director of the National Institute of Financial Research at Tsinghua University in Beijing. “We thought we were on a good path of making progress and having a deal."

“When people looked at the economic numbers, they were shocked. When they look at the import-export numbers they were shocked,” Trump said Thursday. “Try looking at all of the tariffs that China’s been paying us for the last eight months. Billions and billions of dollars.”

While Trump insists that the tariffs are paid for by China, most economists say the evidence shows that their cost is being absorbed by American companies and consumers.