Grammy-winning rap star Lil Wayne was taken to hospital on Sunday after suffering a seizure and being found unconscious in his Chicago hotel room, TMZ said on its web site.

Eminem Had Some Choice Words For Donald Trump During His Concert

Never one to shy away from controversy, Eminem is taking his frustrations with Donald Trump to centre stage.

Earlier this year, the first lady of Young Money revealed she would love to work with Tasha on a forthcoming project. Since then, Nicki has shown the gospel singer continuous love via Twitter and Instagram, even sending Tasha a "double portion blessing" over her recent marriage in March.

"Game of Thrones" is the biggest show on television by a lot of measures, and certainly the biggest hit in HBO's history, so it's no surprise that its actors – the ones who have managed to survive into the seventh season – are making bank.

If you've ever wondered exactly how much a starring role in Westeros pays, Variety now has the answers for you.
{loadmodule mod_banners,nativeads}
In its 2017 salary survey – a "sampling of estimates" for the paychecks of TV's most notable stars – the outlet revealed that Emilia Clarke, Nikolaj Coster-Waldau, Peter Dinklage, Kit Harington and Lena Headey all make the same amount per episode: $500,000.

Yes, that is per episode, meaning a full 13-episode season would bring in well over $6 million. According to their list, that's the same as Kevin Spacey brings in for an episode of House of Cards, and slightly more than Claire Danes makes for an episode of Homeland.

In some cases, that per-episode estimate includes "additional compensation for their work as producers or for their profit participation stakes", meaning that dollar amount isn't their pure per-episode salary as actors – but none of the Thrones cast are listed as producers. (By comparison, Spacey and Danes are both producers on their respective shows.)

If you're now feeling suitably depressed about your own financial prospects, click on over to Variety to read the full list, which includes some more modest paychecks.

The Crown's Claire Foy, for instance, made just $40,000 per episode for the first season of the Netflix drama, though she's undoubtedly renegotiated in the wake of her multiple award nominations.

The Federal Ministry of Health had in a tweet on Friday, said the video to Olamide's "Wo" violated the Tobacco Control Act.

The management of dancehall diva Priscilla Opoku-Kwarteng aka Ebony Reigns has denied rumours that the musician has parted ways with Rufftown Record.

I don’t regret my past — Hajia4Real

Socialite, Hajia4Real real name Mona Faiz Montrage may have had her own share of bad press and controversies because of her lifestyle and the pictures she posts on social media but the C.E.O of LVC Entertainment says she has no regret of her past.

Oprah Winfrey and Stedman Graham 30 year ring-less union has remained a mystery up until now. The talk show OG recently revealed to Vogue why we’ll probably never get to see a Oprah Winfrey wedding special on OWN or anywhere else for that matter.

A very famous Calabasas resident awoke on her birthday to a string quartet and a rose-filled room last week, a gift from her rapper boo.

No, we're not talking about Kimye, but Kim's suspiciously similar looking half-sister Kylie Jenner and her boyfriend, Travis Scott. It would seem Travis took a page out the old Ye book in ringing in the youngest (and richest) KarJenner's birthday.

But the presents didn't stop at just live music and roses. Travis also gifted Kylie a diamond-encrusted butterfly chain that's valued at $60,000. Looks like he really wanted to pull out all the stops for his new girl. You may recall that the butterfly is a relationship motif of sorts for Travis and Kylie (Trylie? Kyvis?), as the couple has matching butterfly tattoos. 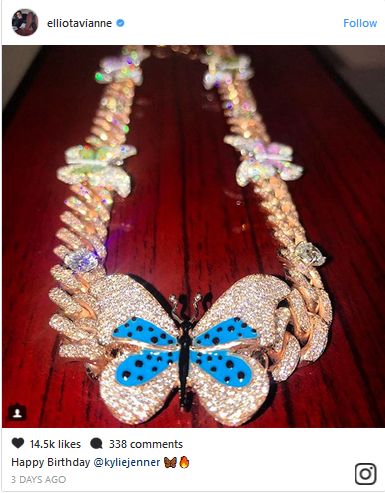 At Kylie's surprise party that was attended by her family, Travis allegedly gave her this cake, above, that reads "I love your phat p***y." Romantic!

Dancehall artiste, Charles Nii Armah Mensah Jnr., known by his stage name as Shatta Wale, is currently the best musician in the country hiplife musician, according to C-zar.

In response to why he left out Samini in his list, C-zar said “Samini is [a good artiste] I don’t play with, he’s marvellous but we are talking of the best artistes at the moment that is why I left out his name.”

C-zar also believes that Sarkodie is the only rapper who has taken Ghana music to the apex as far as the international stage is concerned.

According to him, although Ghanaian rappers are struggling to make inroads on the international stage, Sarkodie has carved a niche for himself with his unique style of rap which has given him international recognition.

“Today, almost all of our songs have turned rap music; it appears if you can’t rap you are out of the game or you can’t do music. This has allowed the Nigerian artistes to take over, because, they have taken the highlife beats and are using their dialects, their pidgin to sing and the foreigners relate with them more than us because they have developed their own style.

“We in Ghana are copying western rappers verbatim and so Ghana music has messed up and that’s how I see it.

“There are a few people like Kofi Kinaata and Wuta with their hit song ‘Bronya’ which today, both the young and old are singing and dancing to, singing…

However, Sarkodie for instance is a rapper and rap has taken him to a different level.

“Apart from Sarkodie who is taking Ghana to another level, honestly speaking, the rest of the rappers are not taking us anywhere. Sarkodie is the only rapper taking Ghana high.”

Oheneyere Gifty Anti has delivered a baby girl to Nana Ansah Kwaw IV, Chief of Adumasa in the Eastern Region.

Mikki Osei Berko aka Master Richard of the popular TV programs tax Driver and Dada Boat says his contract with Multimedia’s Adom FM was terminated without any reason from his employers.

Ghanaian actor and radio host Mikki Osei Berko popularly known as "Massa" Richard says he takes inspiration from host of the Kokrokoo program on Peace FM  Kwame Sefa Kayi, as one of the ways to keep up with life and his day-to-day activities.

Zita exposes ex-husband; reveals why she dumped him

I made Shatta Wale popular– Samini

Popular radio and TV presenter Valentina Agyeiwaa, alias Afia Schwarzenegger has been charged with fraud by the Nima Police.

Christians are too judgmental and not nice – Moesha Boduong

Actress Moesha Boduong has always been at the center of discussions about her choice of dresses and the fact that she exposes too much flesh.

Her choice of dresses leaves much to be desired of her.

But to her, God judges from the heart, not in the outward look of people and this is suggested in her recent post on her Instagram page which is captioned “Sometimes the nicest people you meet are covered in tattoos and sometimes the most judgmental people you meet go to church on Sundays”.

Moesha came to the limelight for her choice of dresses for events and posting of semi-nude photos on the internet. This has won her some roles in a few movies in Ghana including the popular ‘Amakye and Dede’.

The Mansa hit maker who appears to be unlucky finding true love said he is currently single and opened to the idea of finding love.

Bisa Kdei said this in an interview with Natalia Andoh on E on Class on Class91.3FM on Saturday, August 5, 2017.

Talking about his love life, the award-winning musician said “I’m not seeing anybody at the moment, my door is open… I used to [have someone], but the one I was with recently didn’t last long. It lasted for about two weeks. There was a little misunderstanding; we had a mutual agreement so it’s ok.”

“Be determined, be a focused person. Let me see you to be the mother of my kids,” he added.

He is the third of eight children. Bisa Kdei is out with a new single called sister girl.

Young Kumawood actress, Clara Amoateng Benson popularly known as Maame Serwaa has insisted that she is still a virgin though in a relationship and will be engaged in 2020.

Hiplife artist Kwaw Kesse, known in real life as Emmanuel Botwe, is a man who does not shy away from courting controversy; he calls a dog by its name and stands up for it. Known as “abodam” or the mad-man for his eccentric lyrics and stagecraft, he revealed weed smoking is still part of his life, despite serving nearly three months in prison for it.

Mana Jama put her chances of winning the competition on life support after announcing that she wouldn’t be competing in the swimsuit portion of the pageant if she had to wear a bikini because it goes against her religious beliefs.

In discussing her decision with Metro UK, Jama says, “I wouldn’t wear a bikini to the beach, so I’m not going to wear one in a competition to score points.” After she discussed her decision with the heads of the event, they decided that she’d be allowed to cover up if she so chose.

Welp, she did and in doing so, became the first ever woman to wear a kaftan during the bikini portion of a pageant. And she pulled it off stunningly. Alongside her clothing, Jama wore a beautiful choker and hoop earrings.

After her runway performance she took to Instagram and further explained why she decided to take a stand for something she believed in.

“This moment has proved that I am capable of almost anything I set my mind to and limitations is a status waiting to be changed,” she captioned under a pic of her modeling in the competition. “I thank everyone who stood beside me and believed in my vision.”

It’ll be interesting to see the sort of precedent this will set in all beauty pageants across the world. Maybe it’ll give other women the extra courage they need to take a stand in their own way.

Check out Mana Jama about her decision to wear a kaftan during the bikini portion of Miss Universe Great Britain below.

A British model who was allegedly kidnapped and detained for six days in Italy while her captors attempted to sell her in an online auction says she feared for her life after returning to her London home.

Ghana’s former President, John Mahama and wife Lordina Mahama on July 29, 2017, renewed their marriage vows to each other on their 25th anniversary.

Second Lady of Ghana, Samira Bawumia during her trip to India a few days ago, visited the cast of the popular Indian series aired on Adom TV KumKum Bhagya.