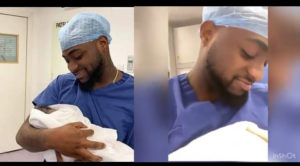 Davido and Chioma have welcomed their first child together and it’s a boy.

Announcing the birth of his son on Sunday, October 20, 2019 via his Instagram handle, the 26-year-old singer calls his fiancee, Chioma, a strong wife.

The pop star also revealed the name of the child as David Adedeji Adeleke Jr.

In the late hours of Saturday, October 19, 2019, Davido announced that he was in the delivery room on Twitter.

Davido formally proposed to Chioma in September at a dinner held in a London restaurant.

The engagement came 10 days after the couple’s family had an introduction ceremony in Rowland’s family home in Lagos.