Emmy Awards 2019: Fleabag and Game of Thrones among major winners 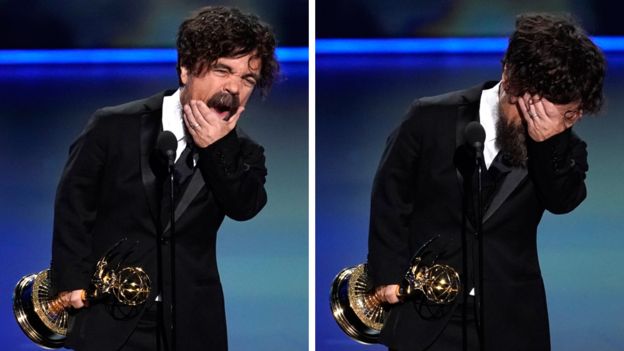 Peter Dinklage was the only Game of Thrones actor to win on Sunday, for playing Tyrion Lannister

The ceremony, which recognises excellence in television, took place in Los Angeles on Sunday.

Originally made for BBC Three, it is the first British-made show to be named best comedy series. "It's so wonderful and reassuring to know that a dirty, pervy, angry and messed-up woman can make it to the Emmys," Waller-Bridge laughed, referring to the show's lead character.

Waller-Bridge also joked that the possibility of winning awards was the reason she wrote the series in the first place.

"I find writing really hard and really painful, but I'd like to say from the bottom of my heart that the reason that I do it is this," she said, holding up the Emmy statuette. "So it's made it all really worth it guys, thank you so much."

Game of Thrones won the night's most prestigious prize - best drama - despite the eighth and final series receiving a mixed response from fans and critics.

One of the HBO fantasy's stars, Peter Dinklage, also took home the prize for best supporting drama actor.
Waller-Bridge's win for leading comedy actress was a particular surprise, given that she was nominated against Emmy favourite Julia Louis-Dreyfus.

The US actress has previously won in this category six times for her role in Veep, and was widely expected to win again for the show's seventh and final series.

Comer's win for her performance as the ruthless assassin Villanelle in BBC America's Killing Eve tops off an extraordinary year for the actress, who also won a TV Bafta in May for the same role.

"I was not expecting to get up on this stage tonight," Comer said as she picked up her prize. "I cannot believe I'm in a category alongside these women, one of them who is my co-star Sandra Oh.

"Safe to say Sandra that this Killing Eve journey has been an absolute whirlwind and I feel so lucky to have shared the whole experience with you."

'Glorious grenade'
As Waller-Bridge took to the stage near the end of the ceremony to accept Fleabag's fourth award of the night, for best comedy series, she commented: "This is getting ridiculous!

"Fleabag started as a one-woman show at the Edinburgh festival in 2014, and the journey has been absolutely mental to get here." 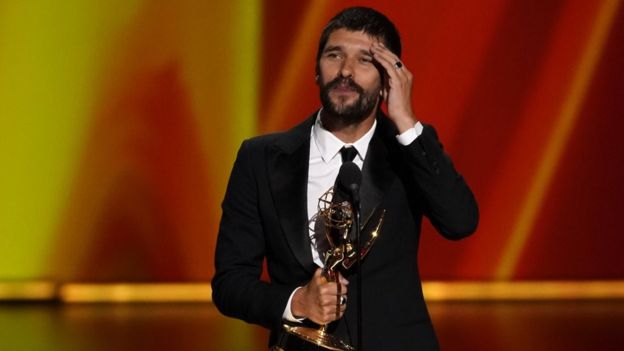 Ben Whishaw was among the other British winners

Paying tribute to Fleabag's "hot priest", she added: "Season two would not have exploded in the way that it did if it wasn't for Andrew Scott, who came into our Fleabag world like a whirlwind and gave a performance of such depth and complexity it elevated the whole thing."

The show's director, Harry Bradbeer, won best director for a comedy series. "For a director, something like Fleabag only comes along once in your life," he said.

"Thank you Phoebe for coming into my life like some kind of glorious grenade. Scientists are still trying to work out how someone so incredibly talented can be so utterly lovely."

The second series of Fleabag aired on the BBC earlier this year and has been released by Amazon in the US.
Other British winners include Ben Whishaw, who won best supporting actor in a limited series for his role in BBC One's A Very English Scandal. He played Norman Scott, the man who accused Liberal leader Jeremy Thorpe of trying to have him killed.

Charlie Brooker won best television movie for Netflix's Bandersnatch, a win he said he was "quite unprepared for". The interactive Bandersnatch allowed viewers to choose the way the film's storyline unfolded.

In his speech, Brooker thanked his two children, joking: "I can never limit your video game screen time again, if I do I'm a disgusting hypocrite [because] it sometimes pays off."

British writer Jesse Armstrong, whose work on HBO's Succession won him best writing for a drama series, made reference to the strong UK showing at the ceremony.

"Quite a lot of British winners, maybe too many? Maybe you should have a think about those immigration restrictions," he joked.

Another Brit, TV host John Oliver, won outstanding variety talk series for Last Week Tonight. In total, 13 of the night's 27 awards had British involvement, including the three trophies for Chernobyl, which was a Sky/HBO co-production.

The series, which dramatised the 1986 nuclear disaster, took home the prize for best limited series, as well as best writing and directing for a limited series.

Elsewhere, the best drama series prize for Game of Thrones and the best supporting drama actor award for Peter Dinklage meant the fantasy epic won 12 Emmys in total, including the trophies it took home at last week's Creative Arts Emmys.

It triumphed in spite of a lukewarm response from critics and fans, many of whom signed a petition to have the whole season remade.

The show is already the most honoured series and most-nominated drama in Emmy awards history.

Billy Porter made history as the first openly gay black man to win best leading drama actor, for his role in Pose.

Other winners included Jharrel Jerome, who won best leading actor in a limited series for When They See Us - a series that told the true story of The Central Park Five, five black and Hispanic men who were jailed for sexual assault despite their innocence.

Sunday's event was only the fourth Emmy ceremony ever not to have a host.

More than 25,000 members of the Television Academy vote for the awards, which were first presented in 1949.

The name Emmy derives from an early piece of TV equipment called the image orthicon camera tube, nicknamed the Immy.