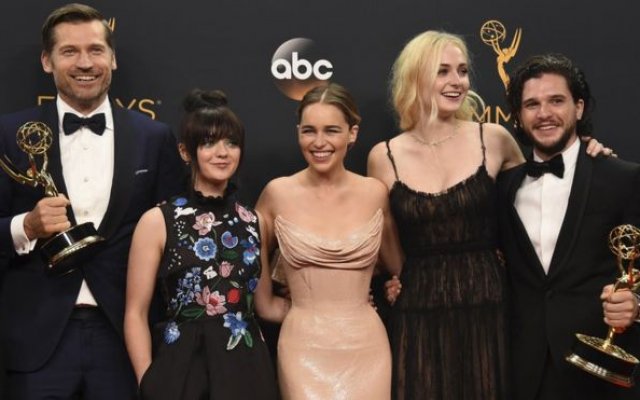 Popular American television series, Game of Thrones has Â broken the record for the highest number of Emmy Awards won by any fictional series.

The HBO fantasy drama triumphed in three categories at Sunday night's ceremony, including outstanding drama series.The show's total number of awards now stands at 38, including the nine trophies it won at last weekend's Creative Arts Emmys.That means it has now surpassed Frasier's previous record of 37.This year's British winners included Dame Maggie Smith, who won outstanding supporting actress in a drama series for her role in Downton Abbey.It is the third time Dame Maggie has won an Emmy for her portrayal of Violet Crawley, but she has never attended the ceremony in person.Host Jimmy Kimmel joked: "We're not mailing this to her. Maggie, if you want this, it will be in the lost and found."BBC One's Sherlock was named best made for TV movie for its special episode The Abominable Bride. Susanne Bier, the Danish director of the BBC's spy thriller The Night Manager, won for best directing in a limited series.Bier, who was the only female nominee in the category, told BBC "This is such a traditional men's world, and I hope the fact a woman director has won this prestigious prize is going to mean that more non-conventional series and movies are going to be directed by women."John Oliver won best variety talk series for his HBO series Last Week Tonight, beating fellow British nominee James Corden, who was nominated for The Late Late Show.Veep won the outstanding comedy series award for the second year in a row, while its star Julia Louis-Dreyfus won outstanding lead comedy actress for the fifth time.In her acceptance speech, Louis-Dreyfus said: "Our show started out as political satire but now feels like a sobering documentary." She dedicated her award to her father, who died on Friday.Tony Hale, who plays the president's personal aide Gary Walsh in Veep, triumphed in the outstanding supporting actor category.The outstanding comedy actor gong went to Jeffrey Tambor, who plays a transgender woman in the Amazon series Transparent, for the second year in a row.Accepting the award, Tambor encouraged the industry to offer more opportunities to the trans community."I would not be unhappy were I the last cisgender male to play a transgender female on television. We have work to do," he said.Rami Malek won outstanding lead actor in a drama series for his role in Mr Robot, while Tatiana Maslany from Orphan Black won outstanding leading actress.Other big winners of the night included The People vs OJ Simpson - a dramatisation of the OJ Simpson trial of the 1990s, which was broadcast on BBC Two in the UK.The show won five trophies including outstanding limited series plus acting gongs for Sarah Paulson, Sterling K Brown and Courtney B Vance.Netflix series Master of None scored its first Emmy award, winning outstanding writing for a comedy series.The show's co-writer Alan Yang called for better Asian representation on screen in his acceptance speech.Elsewhere, The Voice took home the award for outstanding reality competition series, beating Project Runway and Dancing With The Stars.Kimmel made several references to diversity during the ceremony in light of the "Oscars So White" controversy earlier this year."Here in Hollywood the only thing we value more than diversity is congratulating ourselves on how much we value diversity," he said in his opening monologue."The Emmys are so diverse this year the Oscars are now telling people we're one of their closest friends."Last weekend, Game of Thrones dominated the Creative Emmy Awards, picking up nine prizes for technical achievement.Source: BBC