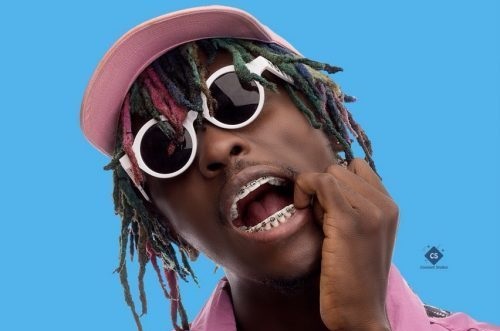 Rapper, Kofi Mole, has debunked allegations by a fan who tagged him as a 'fraud boy' that he has never been involved in such act.

According to the fan, He claimed Kofi Mole is a 'fraud boy' and using music as a coverup.

‘Frauding no b hustling…..Selling Water and pampers in traffic is hustling,’ the fan said.

Kofi Mole, born Edward Kofi Agyeman Amoah in his reply said he left home at a young age to pursue his dreams on the streets and, therefore, wouldn’t rap about things that haven’t happened in his life, as others may do.

“Nahh, this is our life. Ain’t nobody faking out here. Yabr3 ruff! [We have really suffered],” Mole noted.

However, the young rapper in an interview on HitzFM with Andy Dosty apologized to his father after he disrespected him on dropping out of school in level 300 at the University of Ghana to pursue his music career.

"My father wasn't in support of me quitting school for music, it was either I go against my father and continue my music journey or obey him and quit music, but I chose music over schooling, and I knew I really hurt my dad with the decision I took, dad where ever you are I'm sorry, forgive me", he pleaded.

Video: I dropped out from school to do music - Kofi Mole