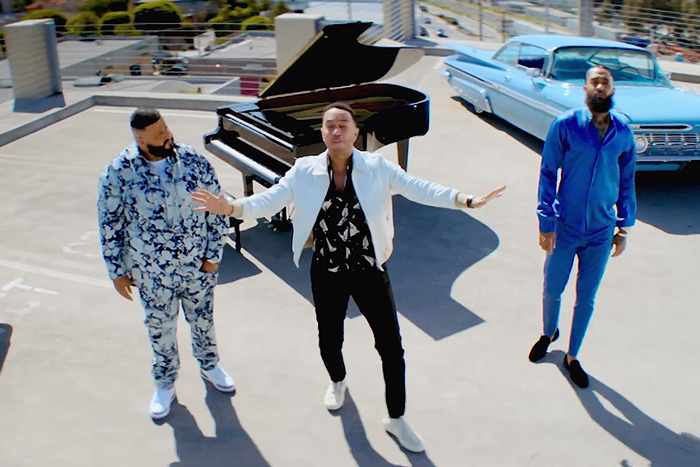 Along with the inspirational track, which also features John Legend, Khaled has premiered the touching video, which was filmed atop a parking structure in Inglewood, Calif. just days before Nipsey’s death. The Eif Rivera-directed clip, dedicated to the loving memory of Nipsey, features powerful and prophetic words from Nip along with Legend’s gospel-tinged vocals.

Decked out in Nipsey blue, the Crenshaw MC reflects on his family and faith. “Lookin’ back at my life made my heart race,” he raps. “Dance with the devil and test all faith / I was thinkin’ chess moves, but it was God grace.”

During an interview with Beats 1, Khaled reflected on working with the late legend. “Thank God for me to be able to work with a king like Nipsey Hussle,” he said. “It’s been hard for me to watch the video, and listen to the song, but also, it’s very beautiful. When you see it and hear it, you’re going to understand what I’m saying. It’s very beautiful because long live Nipsey Hussle, the Marathon continues.”

John Legend added, “Proud to be a part of this inspiring record with djkhaled and @nipseyhussle. We lost him too soon.”

All the proceeds from “Higher” will benefit Nipsey’s children, Emani and Kross. “The very title of the song reminds us that vibrating on a ‘Higher’ level was the essence of Nipsey’s soul,” said Khaled. “It is in this spirit, of moving forward, of preserving his mission that I, my co-writers, producers and label partners are donating 100% of all our proceeds from ‘Higher’ to Nipsey’s children, Emani and Kross.”

Khaled plans to drop seven more visuals off Father of Asahd over the next several days for his collaborations with Cardi B, 21 Savage, SZA, Travis Scott, Chris Brown, Meek Mill, and more.

A gift from my brother Nipsey that we want to share with the world. We miss you and we will forever keep your legacy going. The Marathon Continues. 🏁💙 God Bless You. 🙏🏽🤲🏽

ANTHEMS ONLY! TOP TO BOTTOM! This one’s special! Another One! This one’s personal! #FATHEROFASAHD MIDNIGHT