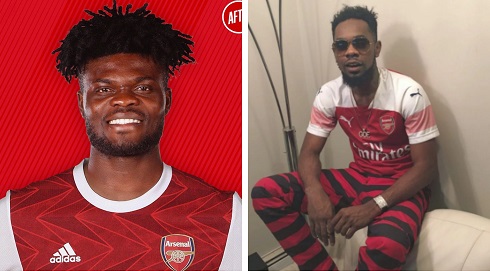 Nigerian reggae-dancehall singer and songwriter, Patrick Nnaemeka Okorie better known by his stage name Patoranking has vowed to host a virtual 2 hours concert in honour of Thomas Partey should he make the move to Arsenal.

Partey's performances for Atletico Madrid have attracted the attention of several clubs across Europe, including Arsenal.

Arsenal have made an enquiry about bringing the Black stars midfielder to Emirates Stadium and the Spanish club have made it know that the player will only be allowed to leave if his €50m clause is triggered.

Patoranking has pleaded Partey to accept the move to the Premier League should Arsenal come calling. He disclosed he will thrills fans with amazing performance when the move is finally sealed.

“With Arsenal, I’m not too sure,” Akonnor said before remarking, “Arsenal fans will kill me [for saying he should not join the gunners].”

“I hope that, and I’m sure money issues will come in, but I hope that whatever he asks for, Atletico will be able to pay,” he concluded.

In a related development. Thomas Partey has been named the deputy skipper of the Black Stars.