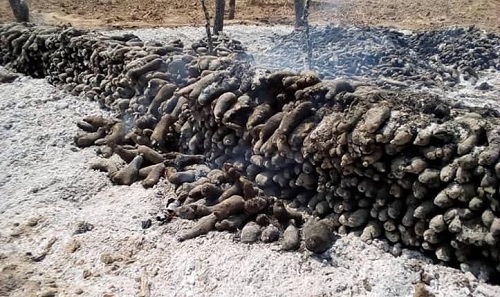 A 39-year-old farmer from Welembelle in the Sissala East Municipality of the Upper West Region is counting his loss after his 12-year-old son burnt is over 2,500 tubers of yam he had harvested and stored in a barn while making arrangements to cart to the market centre.

The burnt yam estimated as several thousands of cedis was literally reduced to ashes in the barn he had stored them awaiting to be transported for sale.

Mohammed Balu of Tumu-based Radford Fm indicate that Adamu Adama Nansia disclosed that his son caused the fire while playing with a stick of matches at the farm close to the barn made of tarch .

The fire according to reports started with a thick smoke and later sparked into flames and when the boy realized what his action had resulted into, he tried to douse the inferno by which time it was already late.

The helpless boy was now screaming for help while the father who was at home rushed to the scene and watched in shock as the yams which he labored for months to cultivate and harvest burnt away.

In an interview, he is quoted to have said “I am thankful to God for my son’s life. The loss is estimated to be around over Ten Thousand Ghana Cedis and now my yams sold to feed my family including yam plants have all been burnt “.

He blamed poor market of yam due to the prices reason for keeping them at the barn with the hope of a shoot in prices in order to make some margin of profit.