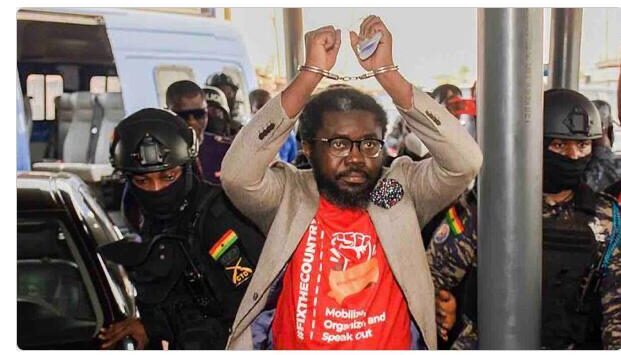 The Office of the Attorney-General and Minister of Justice has prepared the bill of indictment on one of the conveners of the #FixTheCountry movement, Oliver Mawuse Barker-Vormawor.

Per the copy of the bill, Mr Barker-Vormawor has been charged with two counts of treason felony.

The bill of indictment will pave the way for the Ashaiman District Court to commit the accused on the charges.

At the committal stage, if the magistrate finds the convener to have a case to answer for his conduct, he will be committed to stand trial at the High Court on the charges recommended by the A-G.

The state intends to call three witnesses for the trial.

According to the summary of evidence captured in the bill of indictment, the complainant on February 11, this year saw a post by the accused person which stated that: “If this E-levy passes after this cake bullshit, I will do the coup myself. Useless Army!”

The case investigator who led the cybercrime unit of the Criminal Investigations Department said on Tuesday February 1, 2022 during his routine 24-hour cyber surveillance and social media monitoring, picked up information on Oliver Barker-Vormawor’s Facebook which stated "Year of Coups" on his Facebook account.

It further stated that the investigator’s analysis of the "comments" section of the post made on February 1, 2022, indicated that the accused had managed to convince a number of people of the need to usurp the executive powers of the Republic through a violent overthrow of the Constitution.

That, according to the bill of indictment, led the investigator to immediately inform his superiors about the intelligence he gathered for their onward action

On Wednesday, December 23, 2022, 4:48 a.m, the accused made a post on his Facebook profile stating: "Your Democracy! Your Human rights activist President Nana Addo Dankwa Akufo Addo is a fraud! Dear Ghana Police Service, I am waiting for my arrest. Nansins Republic."

The accused is said to have tagged the official Facebook pages of the President of Ghana and the Ghana Police Service.

In another instance, the accused is said to have posted: "This Attorney-General does not fear God. He is claiming that the sick and bedridden Chieftaincy Minister actually went into the chambers and voted for the E-levy even though we all saw that the guy was stuck in his ambulance. If the Supreme Court actually throws away the last of its dignity to join the puppet master in that deception, all just to punish Ghanaians with E-levy at all cost, so that Article 71 holders can live large at the expense of the people, then at this juncture dier, we have crossed the rubicon of no return and I will do the coup myself. Useless Army."

The post, according to the bill of indictment, generated over 400 comments with 70 per cent of his followers supporting his intentions to orchestrate a coup in Ghana.

Mr Barker-Vormawor was arrested in February this year by the police for “threatening to stage a coup”.

The accused, through his lawyers secured a bail at the Tema High Court in the sum of GH¢2 million with two sureties.