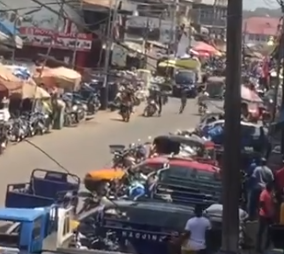 Some three suspects have been arrested over a robbery incident that happened at the Alabar market in Kumasi Friday, October 30, 2020.

The incident which occurred in broad daylight saw scores of traders running helter-skelter.

The robbers had gotten away on a motorbike but the police were informed and have now grabbed three persons in connection with the incident.

His killing adds to a series of attacks in the past few weeks in the Ashanti Region.

Amateur footages secured by residents shows some young men firing shots into the air to disperse residents as they carried out the act of robbery.

The incident which took place on Friday afternoon saw the said attackers jumping onto motorbikes while firing a few more rounds as they fled the scene.

The frightened residents said they are living in fear as they charged the police to arrest the suspects.

This Just happened in Alla Bar (Kumasi) I don’t know the situation there or what caused it but this is not it💔💔 pic.twitter.com/EShqtEnzpF

On Wednesday, a 62-year-old businessman was shot dead by unknown assailants at Asuadee close to Mankranso in the same region.

Alhaji Abubakar Sadiq was gunned down while performing ablution for the evening’s prayers at his fuel station.