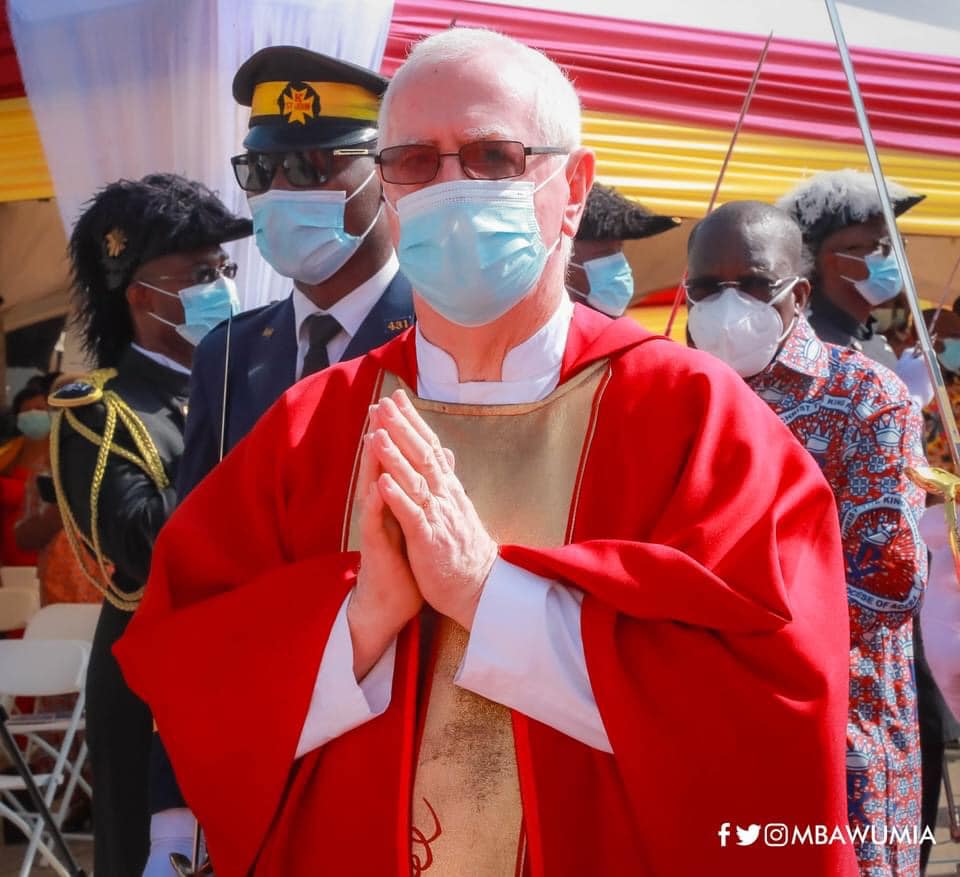 The Christ the King Parish yesterday bid farewell to Rev. Father Campbell, who retired from priestly duties after 50 years of service to the church in Ghana.

Before his retirement at 75, he had served as the Parish Priest of the Christ the King Parish for 12 years.

The farewell Mass climaxed the 70th anniversary celebration of the Christ the King Parish, which was commemorated with a special Mass at the forecourt of the church at Cantonments in Accra. 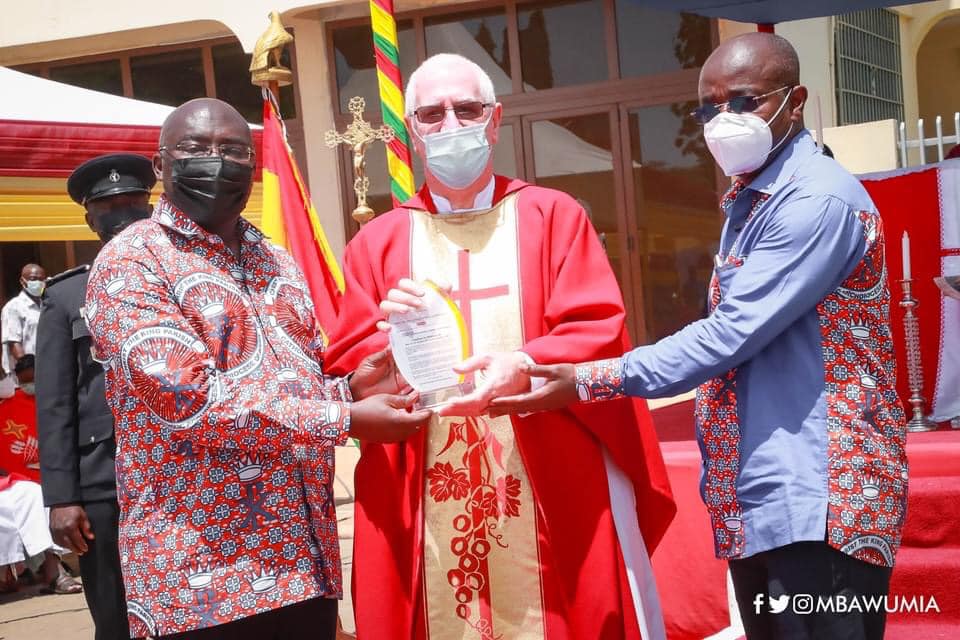 The year-long anniversary was launched on February 14, 2021 on the theme: â€œCelebrating our faith and love: Doing something beautiful for Godâ€.

It was attended by the Speaker of Parliament, Mr Alban Bagbin; the wife of the Vice-President, Mrs Samira Bawumia; the Greater Accra Regional Minister, Mr Henry Quartey; the wife of a late former Vice-President, Mrs Matilda Amissah Arthur; the Apostolic Nuncio to Ghana, Monsignor Henyk Mieczyslaw Jagodzinski; a former Anglican Archbishop of Accra, the Most Rev Justice Ofei Akrofi, and a member of the Council of State, Mr Sam Okudjeto.

A citation was read for Father Campbell, who also received some gifts from the church for his selfless and dedicated service over the years.

Another citation was read for late Kojo Botsio of the Convention Peopleâ€™s Party (CPP) for securing the land on which the church is sited.

An Irish by birth, Father Campbell has been in Ghana for the past 50 years and served at the St Peterâ€™s Catholic Church at Osu, the Sacred Heart Catholic Church in Accra, the Good Shepherd Parish at Community Two, Tema, and the Christ the King Parish at Cantonments. 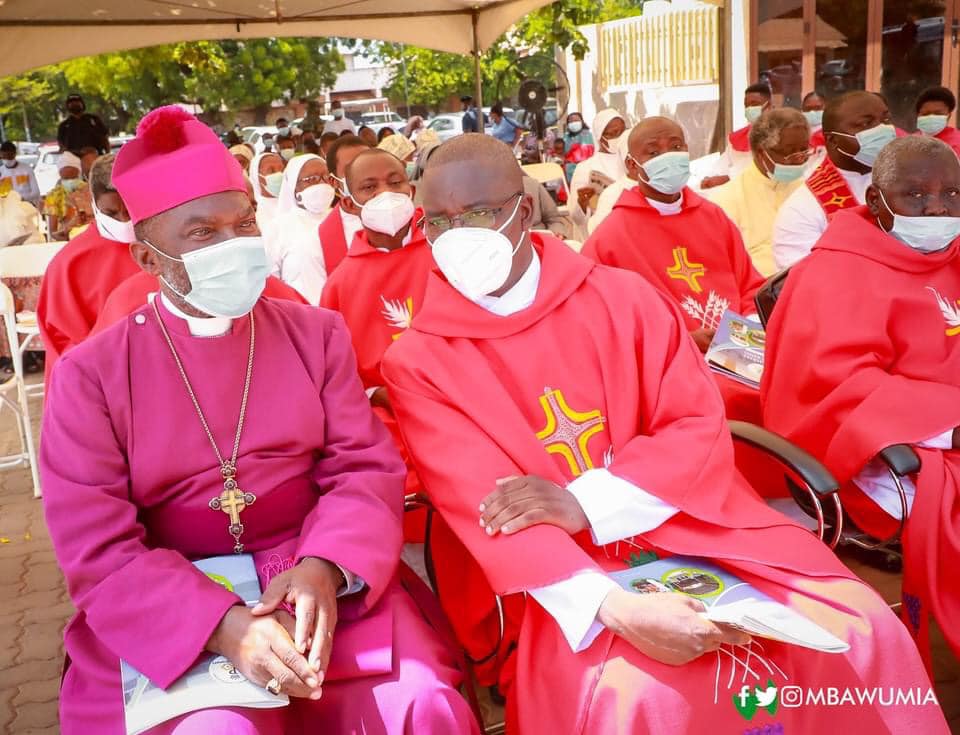 The Director of Pastoral Missions of the Accra Archdiocese of the Catholic Church, Rev. Father John Patrick Tindana, expressed appreciation to Father Campbell for his perseverance, dedication and zeal during his stay.

According to him, â€œPastor Campbell brings love and hope to the poor and vulnerableâ€.

Rev. Father Tindana urged members of the church not to rest on their laurels but be proud of their achievements so far.

He said the church must be filled by the love shared by Christians because it was the only way to ensure the presence of the Holy Spirit in the church, adding that a church embroiled in bitter quarrels was a church without spirit.

He further urged parishioners to come out of their comfort zones and take the Gospel to the peripheries of society.

In his farewell message, Father Campbell apologised to all those he might have offended in the course of his service to the church.

He listed a number of initiatives he undertook during his tenure, such as the construction of the Adoration Chapel at Christ the King, his support for various leprosaria and the setting up of the Christ the King Soup Kitchen.

â€œMy heart is filled with joy as I share these memories of kindness, generosity and love,â€ he said.

Father Campbell also expressed appreciation to all those who supported him and the church and singled out Dr Bawumia for the sustained support for his (Father Campbellâ€™s) initiatives.

He pledged to set up another soup kitchen at Osu in Accra and also launch a Father Campbell Foundation.

The Vice-President described Father Campbell as the â€œJubilee House Parish Priest and Chaplainâ€, saying the priest had contributed his quota to society.

â€œJust over half a century ago, a young 25-year-old priest left his home in Ireland, left his church community, his mother, his father and his entire family and graced our shores.

â€œFor 50 years, he has contributed his quota to our society, be it in his vocation or going the extra mile. This, I can say, he has, in all propriety, done.

â€œOn behalf of the people of Ghana, I extend my sincere gratitude to the Catholic Church of Ghana for sharing Father Campbell with us. May God, in His infinite Goodness, favour him and grant him success in all his future endeavours as he continues his work in the Lordâ€™s Vineyard,â€ Dr Bawumia added.

On behalf of President Nana Addo Dankwa Akufo-Addo, the Vice-President donated GHÂ¢100,000 and a Kente cloth to Father Campbell and GHÂ¢50,000 to the Parish.