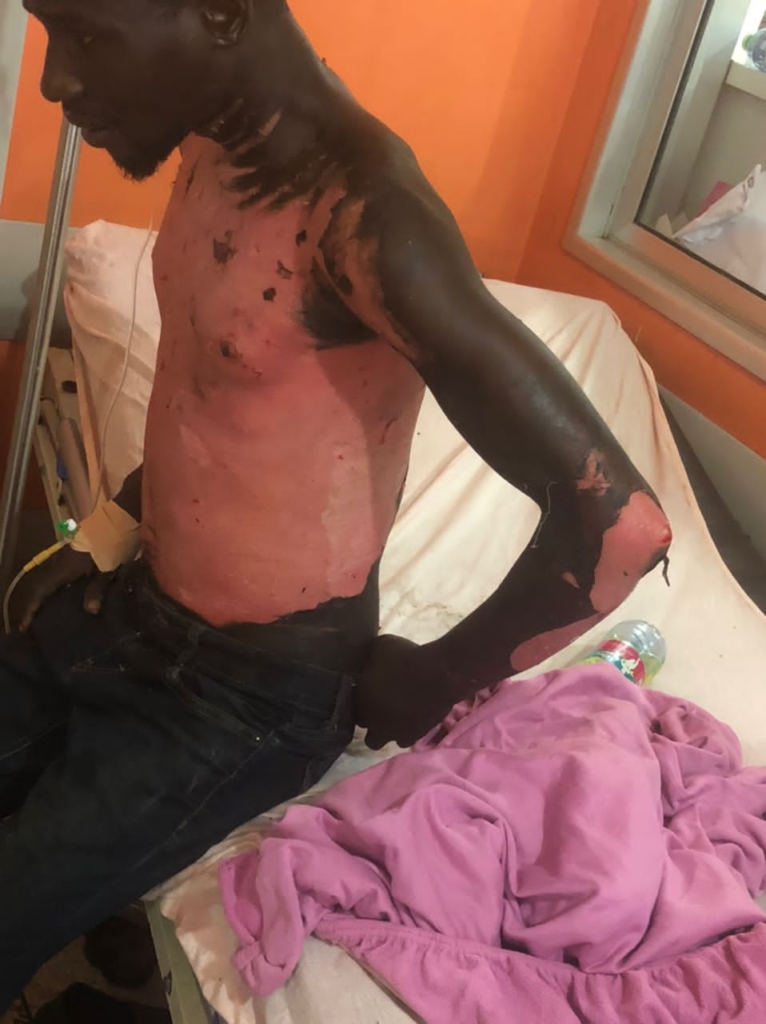 A 32-year-old homeless man is struggling to get medical care after his street friend poured hot water on him for allegedly eating his food.

Francis Agyei, who denied eating his friend’s food, sustained severe burns to his mid-section and has since been admitted at the Komfo Anokye Teaching Hospital.

But with no money or contacts of relatives to foot his medical bills, health workers at the hospital have been soliciting funds internally to support him.

Francis Agyei left his village at Sefwi Bekwai to seek greener pastures in Kumasi. He has since been sleeping in an uncompleted building at Denkyembuoso in Kumasi.

“I came to Kumasi to hustle and make ends meet so I can support my family. I was into ‘galamsey’ before coming here. I came to the city three and half years ago,” he said.

Wrapped in bandages around his midsection and arms, Francis narrates that his friend, under the influence of alcohol, poured hot water on him whilst he was sleeping.

He said he had earlier confronted him over a meal he accused him of eating.

“We had no grudge. My friend explained someone had eaten the rice he had left. He came back to the house around 3:00am demanding for his food. I told him I had not eaten it. I left him and went back to bed. At 5:00am, he approached me and poured hot water on me,” he said.

Francis sustained severe burns and is currently responding to treatment.

Plastic and Reconstructive Surgeon at the Komfo Anokye Teaching Hospital, Dr. Papa Kwasi Fiifi-Yankson indicates that Francis has been detained because he is unable to his bills.

“He was initially seen and given the necessary drugs with occlusive dressing. He’s been discharged and will be visiting the hospital on an out-patient basis. He will be dressing his wounds 2 to 3 times a week. That will cost him about GHC300 to 500 per dressing. But since he is not able to foot his bills, he has been detained,” he said.

Francis, who has no money to pay his bills, has since relied on the benevolence of health officers at the hospital to treat his wounds and provide daily meals.

An emergency nurse at KATH, Hagar Baidoo, has been leading the charge to solicit funds to foot his medical bills.

“There was nobody to help out with his bills when he was readmitted to the hospital. So, I decided to solicit funds through the nurses and doctors,” she said.

If Francis is discharged today, he has no home to go to. He is appealing for help.

“I am calling on my mum and siblings to come to my aid,” he said.