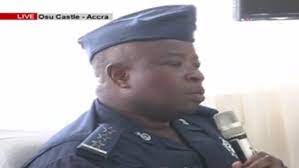 DSP Samuel K. Azugu has been transferred from the National Security Secretariat at the Blue Gate.

The police officer has been moved to the National Operation headquarters of the Ghana Police Service.

It is unclear if Mr. Azugu was transferred because of his role at the National Security Secretariat, when its operatives arrested and assaulted the Citi FM's journalist, Caleb Kudah.

Mr. Azugu is also known for his role in the infamous Ayawaso West Wuogon by election violence.