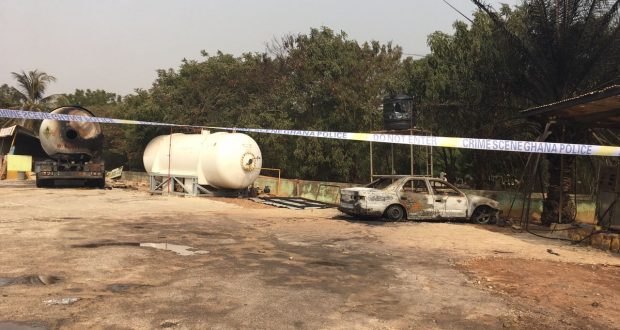 The Environmental Protection Agency (EPA) has shut down the liquefied petroleum gas (LPG) station that exploded last Thursday and left nine dead and more than 12 injured.

According to the agency, preliminary investigations pointed to a leakage at the station which recorded the first blast around 5.30 p.m. before it swept across the road and entered a section of the Ghana International Trade Fair Centre where three buildings and three cars were completely burnt.

The decision to close down the station and an adjoining one is to make way for the evacuation of gas to prevent what the head of the agency’s Built Environment said was to prevent “any further danger to public health and safety.”

A day after the disaster, a combined team from the EPA, National Petroleum Authority (NPA), the Ghana National Fire Service (GNFS) Trinity Gas and the Ghana Police Service were busily fixing tubes to evacuate the gas.

A vessel belonging to Trinity Gas was on site to be connected to the tanks at the station to cart away the LPG.

Fire officers were still spraying water at the site where the evacuation exercise was ongoing.

The entire road, where the accident occurred, remained closed to the public as the authorities maintained a firm grip on the prevention of any further disaster.

Last Thursday’s explosion is the second in 19 months that a gas explosion has claimed lives—the last time being the bang at Dansoman which killed two in April last year.

A Chief Programme Officer of the EPA, William Hayfron Acquah, who was part of the team in charge of the evacuation, described the incident as “unfortunate given the number of casualties.”

He said as a precaution, the road would remain closed even after the evacuation because the concentration of gas still remained very high in portions of drains in the area.

“If there is any source of heat, it could ignite fire and, therefore, it would be safe that even after we have carried the gas away, we will keep the road closed today, so that by tomorrow, it will be safe for vehicles to use. This will ensure that there will not be sparks to generate fire.”

On the cause of the fire, he said from preliminary investigations, it was an operational challenge.

“There was a pressure built up in a vessel as a result of which the neck of the vessel was out because of excessive pressure, it leaked and once there was a leakage of gas and there was any source of heat, it would trigger fire. That was what happened.

“Because of the wind direction from the station towards the downstream (Trade Fair), the fire spread to that end. The pressure pushed the fire beyond the wall and that was how come it travelled all the way inside the Trade Fair.”

With the public already pointing accusing fingers at regulatory institutions, including the EPA for the spate of gas explosions, Mr. Hayfron refused to accept any blame for the incident.

He said the EPA had not failed the nation as it had constantly followed its regulatory procedures and consistently inspected sites before renewing permits.