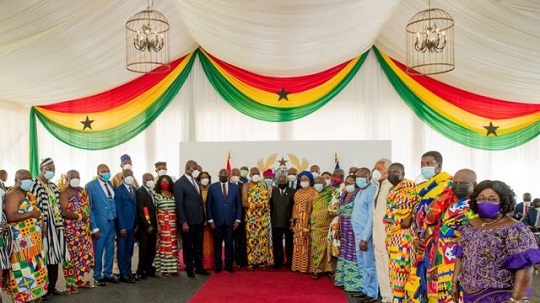 In recent moments, the relevance of the Council of State (CoS) has come under increased scrutiny and has always been a major feature of proposed constitutional reviews advocated by constitutional experts, jurists and statesmen and women.

While some are of the opinion that the CoS serves an important function in our constitutional dispensation, others believe it has outlived its relevance, with some even describing it as a rubber stamp for the Executive and an undemocratic institution that needs to be scrapped under a democracy.

Creation of the CoS

The reason is simple. For many people, this constitutional body, is not living up to expectation and needs a review.

The rationale behind the creation of the CoS was the same concept under our traditional chieftaincy system where a council of elders advised a chief on important chieftaincy matters.

Under the 1992 Constitution, the CoS serves as an important advisory body to the President on many important issues, especially in relation to appointment of heads of crucial constitutional institutions.

Per Article 144 of the 1992 Constitution, the President can only appoint the Chief Justice and Justices of the Supreme Court in consultation with the Council of State, while under Article 70 of the 1992 Constitution, the President is mandated to consult the Council of State before appointing the Chairperson of the Electoral Commission and members of the Commission, the Auditor-General, the Commissioner for Human Rights and Administrative Justice, the Administrator of the District Assembly Common Fund and governing bodies of public corporations.

The constitutional mandate of the CoS has been given judicial blessing in a decision in which the Supreme Court held that although the President is not bound to follow the advice of the CoS, he or she is bound to seek that advice.

In view of all of these constitutional provisions, many are still questioning the relevance of this body. One of such critics is former President John Agyekum Kufuor, who in a recent constitutional dialogue organised by the Institute of Economic Affairs (IEA), described the CoS as “not fit for purpose.”

According to the former President, the CoS must be replaced by an Upper Chamber of Parliament whose decisions would be binding to check what he described as the “excesses of democracy.”

Mr Kufuor explained that the Upper Chamber must also possess vetting powers and help check pitfalls in debates or proposed economic policies laid before the Lower House of Parliament whose members should be directly elected by the electorate.

For the composition of the Upper Chamber, he proposed between 80 and 100 members from identifiable institutions, civil society organisations (CSOs), the National House of Chiefs, religious leaders, free thinkers, as well as representatives from the three arms of government — the Executive, the Legislature and the Judiciary.

Basically, President Kufuor is advocating that instead of having a CoS that would be tied to the Presidency as a “council of elders” whose advice was not binding, there should rather be a body that would serve the entire nation and offer binding decisions in a democratic manner.

As the only living former President who served his full two-term of office, eight years in all, President Kufuor’s viewpoints cannot be easily dismissed and if meritorious, should be considered as part of any constitutional review process.

Is it time to cap our ministers?

Another thorny issue that has come up for public discussion is in the effective management of the public purse and whether to cap the number of political appointments especially of ministers.

Capping of ministers has become one of the key issues that doesn't seem to go away because it keeps coming up whenever effective and efficient governance of the country are being discussed on various platforms.

Just recently at an IEA Constitutional Review Seminar, the Majority and Minority Leaders in Parliament, Osei Kyei-Mensah-Bonsu and Haruna Iddrisu, respectively, raised the issue and said the lack of a ceiling for those appointments was unsustainable and a bane to good and efficient governance.

They are not alone in raising this issue because other political actors including the 2012 Presidential Candidate of the Convention People's Party, Dr Michael Abu Sakara Foster, has expressed similar sentiments in the past.

Others who raised similar issues were the Founder and former Presidential Candidate of the Progressive People's Party, Dr Papa Kwesi Nduom, and two-time Independent candidate (2012 and 2016), Jacob Osei Yeboah. They both underscored the need for the country to cap its ministers.

There are some arguments advanced for the capping of the ministers. They include promotion of cost efficiency in running a government and thereby demonstrating to the citizens that the government cares.

It also shows that the government is thinking about the welfare of the citizenry.

There are some arguments for not capping ministers that suggest that enough ministers with equitable strength are needed for diverse areas of interests.

Notwithstanding the two positions, once this matter comes up and in view of the fact that our resources are limited one cannot take such suggestions lightly and downplay them.

As a nation, I think we all need to come together and take dispassionate viewpoints on the way forward.

At the end of the day we are all looking at how efficient we can run affairs of state, utilise the resources of the country and spend every penny wisely.

If we look at it this way, I think we can arrive at a certain consensus that will be meaningful to the country and impact on the accelerated national development positively.