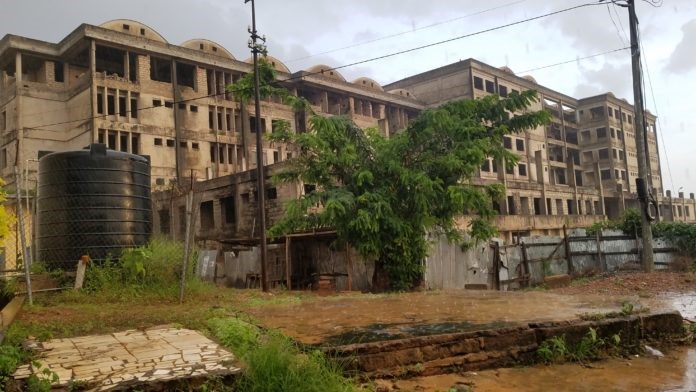 Richard Vanderpuye, Project lead at the Maternity and Child Project at the Komfo Anokye Teaching Hospital (KATH) has explained the reasons for the imminent demolishing of uncompleted maternity block at the hospital.

According to Mr Vanderpuye, the decision was arrived at after the contractor at the site did some findings and submitted the report to the Ministry of Health.

He further said after going through the report, they found out that demolishing and rebuilding will serve Ghanaians better than trying to reinforce.

"The contractor has done a report and has submitted the findings to us, the Ministry of Health has decided that the best option is to demolish based on the information from the contractor. We already have information from previous reports where the Ghana Institution of Engineers had recommended two approaches, reinforce as option one or demolish as option two, we choose reinforcement but looking at the cost, we feel with the new information on the state of the structural weakness it is better we demolish and rebuild because we have the opportunity of making it more modern in terms of planning of health facilities of the 21st century, we have much more to gain if we rebuild" he said on the Joy Super Morning show on February 18, 2021.

The Maternity and Baby Unit (MBU) of the Komfo Anokye Teaching Hospital (KATH) in Kumasi is to be pulled down to pave way for a new structure that is fit for the purpose.

The 45-year-old structure, meant to accommodate 750 beds, lecture halls, restaurants, operation theatres among others, has been found to be too weak to accommodate all the equipment and the number of people expected to use the facility.

Following a number of structural analyses conducted on the building, it has been recommended that it be demolished for a new one to be built in its stead.

Following the handing over of the project by President Nana Addo Dankwa Akufo-Addo on May 15, 2020, to the current contractors, Contracta UK Ltd, the latter has conducted a number of tests on the structural integrity of the building.

All the tests showed that the building had become too weak to accommodate the equipment and the anticipated human traffic and might not survive the test of time.

The company, therefore, proposed that the building be pulled down for work to start afresh on the 750-bed capacity facility.

Similar tests conducted by the Ministry of Health (MoH), also showed that the columns of the structure had become too old and weak, while the concrete too had become brittle and the iron rods were also rusting.