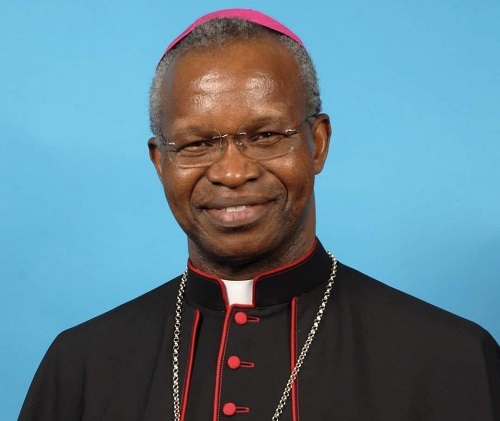 Ghanaian Cardinal Richard Kuuia Baawobr of the Catholic Church is dead. He died in Rome on Sunday evening.

A statement issued in Rome by André-Léon Simonart, Secretary General of the African Missionary announcing the death stated, “With sadness and pain we hereby inform you of the return to the heavenly Father of Cardinal Richard Baawobr which occurred today, Sunday, 27 November 2022.

“Our confrere was taken by ambulance from the Generalate to the Gemelli Hospital at 5.45pm and we received the sad news at 6.25pm.

“May Richard rest in the peace of his Lord whom he so generously served. On behalf of the bereaved Society. Our prayer and our thoughts go also to his family, to his diocese, his fellow bishops, to all his friends and acquaintances,” the statement added.

He was among 21 new Cardinals created on Saturday, August 27, 2022 Consistory.

He was, however, absent at the consistory after he was hospitalized with a cardiovascular disease. 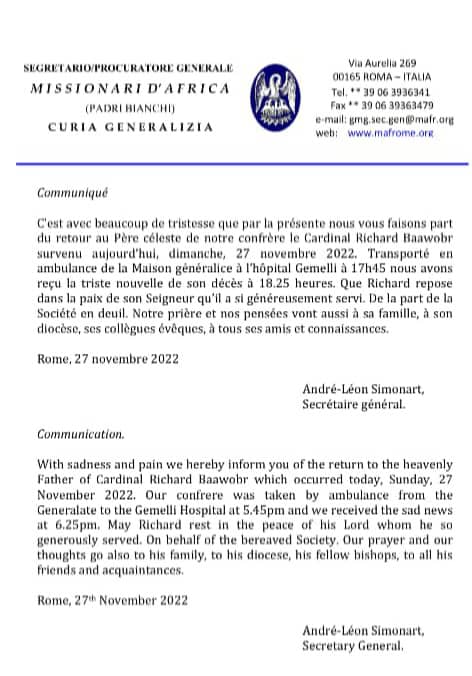 He attended elementary school in the village, and continued his studies at Saint Francis Xavier minor seminary and Nandom Secondary School.

He entered Saint Victor diocesan major seminary in Tamale in 1979, and after his studies in philosophy, in 1981 he entered the Society of Missionaries of Africa, where he continued his preparation for the priesthood.

From 1981 to 1982 he carried out his novitiate in Fribourg, Switzerland. Then, from 1982 to 1987, he completed his theological studies at the Missionary Institute London (MIL).

After priestly ordination, he first served as parish vicar in Livulu, archdiocese of Kinshasa, in the Democratic Republic of Congo (1987-1991).

From 1991 to 1996 he studied exegesis at the Pontifical Biblical Institute in Rome and Ignatian Spirituality at Le Chatelard in Lyon, France, where he was awarded a licentiate in Sacred Scripture and a doctorate in biblical theology.

On February 17, 2016, the Holy Father Francis appointed him bishop of the diocese of Wa, Ghana, and on July 4, 2020, he was appointed member and consultor of the Pontifical Council for Promoting Christian Unity.

Created and proclaimed Cardinal by Pope Francis in the consistory of 27 August 2022, of the Title of S. Maria Immacolata di Lourdes a Boccea.