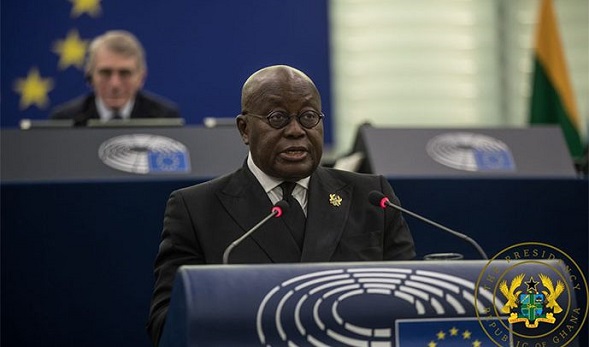 President Akufo-Addo has hinted that his administration intends to strengthen its cooperation with the European Union (EU) in order to fight head-on, the security threat posed by the activities of terrorists in the West African region, which is threatening to spill over from her northern (Burkina Faso) and western (Ivory Coast) neighbours into her shores.

President Akufo-Addo made this known when he held bilateral talks with the European Council President, Charles Michel, at the Jubilee House on Monday (21 November).  President Michel is in Ghana for a security summit, dubbed, “the Accra Initiative”.

“Today the epicentre of terrorists’ activities is Burkina Faso, who is our northern neighbour. Even [Ivory Coast] who is our western neighbour has also been a subject of these terrorists’ attacks. So far, touchwood, Ghana has escaped but for how long can Ghana escape,” Akufo-Addo said.

“I don’t think it can be very long, we have therefore to make the adequate preparation to see to what extent we can forestall it and ultimately, the most important, to find a way to actually bring an end to the terrorists’ menace in West Africa.

“It is not going to be easy but that has to be our goal. Just as they (terrorists) were defeated in the Middle East, we have to do the same here in Ghana,” the President added.

Michel, on his part indicated that the Council is committed to supporting all the efforts of West African leaders aimed at eliminating terrorism and its related activities from the region.

He also noted that the European Council and for that matter the European Union looks forward to strengthening economic ties with Ghana and the rest of West Africa amidst the current global economic downturn.

The European Council is the EU institution that defines the general political direction and priorities of the European Union.

The European Council defines the EU’s overall political direction and priorities, traditionally by adopting conclusions. It does not negotiate or adopt EU laws.

Established as an informal summit in 1975, the European Council was formalized as an institution in 2009 upon the commencement of the Treaty of Lisbon. Its current president is Charles Michel, former Prime Minister of Belgium.

While the European Council has no legislative power, it is a strategic (and crisis-solving) body that provides the union with general political directions and priorities, and acts as a collective presidency.

The European Commission remains the sole initiator of legislation, but the European Council is able to provide an impetus to guide legislative policy.

The meetings of the European Council, still commonly referred to as EU summits, are chaired by its president and take place at least twice every six months; usually in the Europa building in Brussels.

Decisions of the European Council are taken by consensus, except where the Treaties provide otherwise.