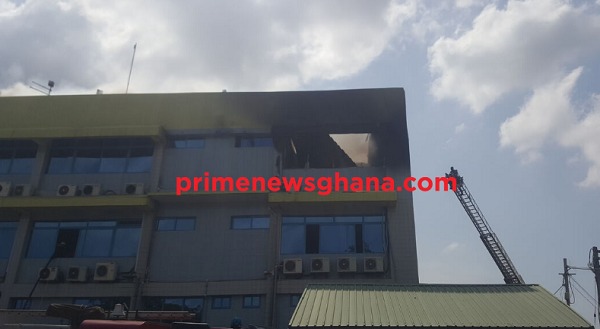 The Bureau of Public Safety non-profit organization is calling for an immediate probe into the fire that engulfed the Ghana Revenue Authority (GRA) head office annex near the Kwame Nkrumah Interchange.

The fire that started around 8:am on December 1, took the Fire Service personnel over six hours to put it out.

Although the National Fire Service says the cause of the fire is not yet known, Bureau of Public Safety said it will not rule out “criminal intent” or the work of a “smart” employee seeking to cover up a misdeed or it could just be a lapse in the facility’s operations and management.

The Bureau, in a statement signed by its Chief Executive Nana Yaw Akwada, said: “The Ghana Revenue Authority (GRA) is a conglomerate of about four state institutions including Customs. Hence, the GRA, and its facilities are, or should be a designated 'sensitive state installation'. Thus, its operating spaces within and immediate environ must be effectively secured with relevant safety systems and also remain under constant (24/7) surveillance.

The statement said the fire that started and “advanced in the manner” it did “should not be a matter of usual everyday occurrence”, adding: “This could be the work of a ‘smart’ employee seeking a cover-up over a misdeed” or could just be a lapse in the facility’s operations and management. But this happening in a sensitive security facility is a big deal.

“State security, the regulators and, indeed, the citizenry should be worried and deeply so. While I will not rule out criminal intent, it is extremely difficult for me to admit that the GRA building had no fire permit that will require them to install early warning systems, risers (from third floor upward), sprinkler systems, and other fire safety equipment in place.

“According to Regulations 11 and 12 of the Fire Precaution (Premises) Regulations, 2003 LI 1724 and its Amendment Act LI 2249 of 2016, Fire Alarms and Fire Equipment on occupiers’ premises shall be inspected, at least, once every six months. Was the GRA in compliance or in violation of these provisions? Did the Ghana National Fire Service discharge its mandate accordingly?