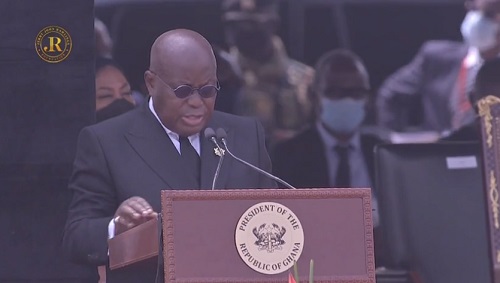 President Akufo-Addo says history will render a positive verdict on the late President JJ Rawlings for his role in Ghana’s democratic development.

President in his tribute said, “I believe that history, on balance, will be kind to him, and will render a positive verdict on his contribution to the evolution of our nation, and the entrenchment of its democratic institutions and culture. It is entirely appropriate and fitting that he should receive a State Funeral with full honours to express the gratitude of the nation for that contribution,” the President said while delivering a tribute on behalf of the state at the funeral of the late President.

The President also recounted that despite his initial tensed relationship with Mr Rawlings, the two of them saw “value in each other” as time went on.

“It was no secret that the relationship that existed between the two of us, right from the heady days of 1979, through to my brief period in exile, his assumption of office as the 1st President of the 4th Republic, the historic Kume Preko demonstrations, my period as Attorney General and Minister for Foreign Affairs in the Kufuor administration, to my being elected 2008 NPP presidential candidate, was one of open animosity. We did not see eye to eye!!

“However, with time, things changed. We came to see value in each other, and understood, to a very large degree, our respective perspectives. One thing we had in common was our mutual commitment to public service,” he said.

He noted: “My visit to his Ridge residence in 2012 signified the easing of tensions between us, leading to a friendship that lasted for the better part of some eight (8) years. Indeed, when the Ghanaian people, in 2016, reposed, for the first time, their confidence in me in the elections of that year, one of the first persons on whom I paid a courtesy call was His Excellency, Jerry John Rawlings”.