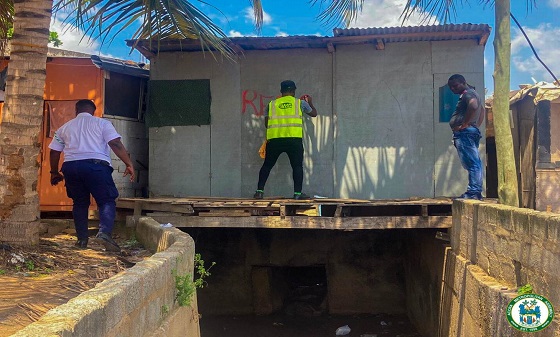 The Accra Metropolitan Assembly (AMA) has earmarked over 100 illegal structures in Kofikrom, a community within the Okaikoi South Sub-Metropolitan District for removal to avert perennial flooding.

The exercise follows an order from the La court after a series of engagements between Public Health Officers and squatters to vacate the location due to the danger their activities pose to public safety.

Head of Public Affairs of AMA, Gilbert Nii Ankrah, in an interview with the media indicated that due to the structures on the storm drain coupled with the dumping of refuse into the drains, the Assembly was unable to effectively desilt the drain, causing flooding anytime it rains.

He noted that occupants in the structures also defecate in the drain causing the spread of diseases and engaging in illicit activities adding that some of the occupants also operate kraal under unhygienic conditions with offensive odour and flies.

He noted that there had been reports of how some of these squatters defecate and throw it into some adjoining buildings, including companies such as the ECG Technical Office, Duraplast Company limited and Ashfoam limited.

"We have had alleged reports of how some of them jump into the nearby company to steal on several occasions... Most of the structures are believed to be used as brothels by sex workers as well, " he added.

Mr Nii Ankrah explained that the illegal structures had created a state of fear in the community as they have continuously been terrorized by criminals who use the structures as their hideouts.

He noted that the Assembly would move in to forcefully eject the occupants if they fail to adhere to the notices served them adding that this was not the first time there were been asked to vacate the location.