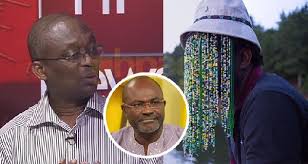 The High Court in its verdict gave Kennedy Agyapong 30 days to retract and apologise three times on the platforms he used to defame Kweku Baako.

Mr Kennedy Agyapong had used words Mr Baako deemed were defamatory against him in addition to that, Mr Agyapong dared Baako to pursue a lawsuit against him.

They were attempts to settle the case out of court but Kweku Baako refused.

“There have been attempts to do an out of court settlement at their initiative. Money is not the problem but I have already gone in the dock and given my testimony he came on to do his but it was truncated because the judge adjourned. There were other businesses she wanted to deal with but when we came back the next court day, they had come with an initiative seeking for an out of court settlement”, he revealed.

The veteran journalist revealed that an open application was made to the court and the judge granted both parties deal with it and come back.

“We have tried three times and I put in place terms of settlement. I propose terms of settlement for him to deal with but he came back with a counter of some small element which I find unacceptable…I find a certain element in his counter completely unacceptable. The judge has given us Monday 22nd July to come with some settlement. If we go and we are not able, she is indicated that she will settle the case 31st July before the courts go on vacation”

Kweku Baako had sued Assin Central MP at the Accra High Court, seeking damages to the sum of GH¢25 million for defamation.

According to Mr Baako, the lawmaker defamed him on a radio talk show called Boiling Point on Oman FM and Adom Badwam talk show on Adom FM on separate dates.

Mr Baako is also praying the court to direct Mr Agyapong to “publish on three consecutive occasions on the same platform that he published the defamatory words, an unqualified retraction and an apology, with the same prominence as given to the issuance of the defamatory words. Other costs including legal fees and any others as this honourable court may deem fit.”

While talking on Boiling Point on Oman FM, Mr Agyapong according to the plaintiff allegedly said the following about him.