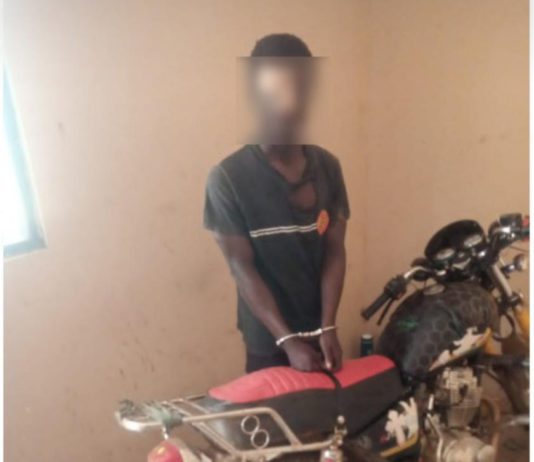 Police in Sehwi in the Western North Region have arrested a 27-year-old man who shot a motorcycle rider (Okada) he hired and escaped with his valuables including the bike.

Reports say the suspect, identified as Prince Yoma hired the motorbike rider, Charles Bosompim from Sehwi Essase, a farming community in the Akontombra district to transport him to Sehwi Ahibenso in the Bodi district.

However, along the way, the suspect diverted the route through a lone area, saying he wanted to receive money from a colleague working in a mining site along the road, to pay the Okada rider.

According to adomonline.com, while riding to the supposed mining site, the suspect pulled a locally manufactured pistol with which he shot the Okada rider in the neck.

The news website reports the victim as saying that he fell flat and pretended he was dead after being shot.

The suspect then took his time to pick up the victim’s items before fleeing with the motorbike, thinking that the suspect must have died.

The victim then rushed to seek help from some residents. Some farmers who chance upon the suspect rushed him to the hospital at Sehwi Juaboso but he was later referred to Asafo and Komfo Anokye Teaching Hospital where he is said to be receiving treatment.

The police, upon a tipoff, laid an ambush for the suspect and arrested him. The officers retrieve the stolen motorbike, two Ghana cards, a pistol and other items from him.