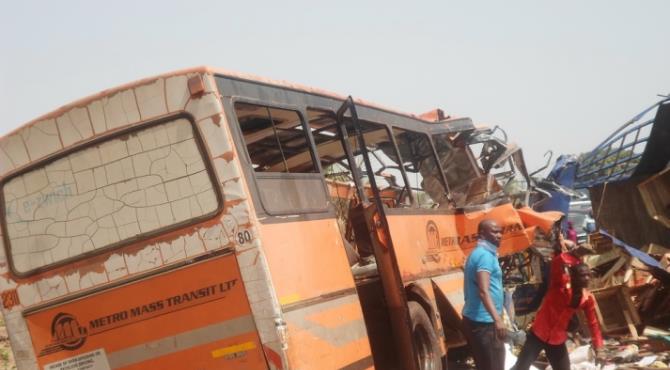 A Metro Mass Transit bus driver has died in a fatal head-on collision with a Lowbed truck vehicle at Akyem Anyinam stretch of the Accra to Kumasi road.

The body of the deceased, George Mensah, 46, has been extricated and deposited at Chad morgue in Akyem Osino.

George Mensah now deceased was in charge of the Metro Mass Transit bus with registration number GW 5859 – 18 with passengers onboard driving from Accra to Kumasi.

According to the acting Public Relations Officer of the Eastern Regional Police Command, Sargeant Francis Gomado, on reaching a section of the road at Akyem Anyinam town near Hospital junction, a Shacman Lowbed truck with registration number GW 5698 -16 which was also heading towards Accra from Kumasi direction veered off into the lane of the Metro Mass Transit bus and collided head-on killing the driver of the Metro Mass bus on the spot.

Few passengers in the bus and driver of the Lowbed vehicle who sustained minor injuries were treated and discharged at the hospital.