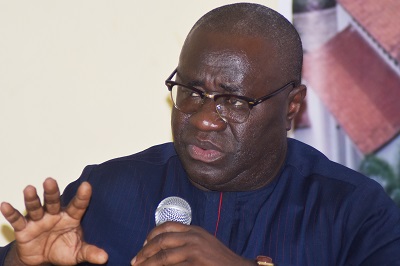 His comments come on the back of a decision by the Ministry of Interior to provide parliamentarians with personal bodyguards.

This came about as a result of the murder of Mfantseman MP Ekow Quansah Hayford who died after being shot by robbers.

Mr Aning speaking on Joy FM's Newsfile said the decision to provide them security has received mixed reactions because of how they have responded to security in general of the entire populace.

"Do they (MPs) deserve what they are demanding? I think they haven't worked hard enough to reflect and demonstrate to Ghanaians that their security matters to them. Last week one member of parliament said people are envious and that is why they don't want security provided for them, no Ghanaian forced someone to be an MP they came out to campaign. The Interior Minister's point about the Parliamentary protection unit is a very good point, the question is what has resulted in this Parliamentary protection unit not being retooled or equipped and that is a general reflection of Parliament's weakness when it comes to security"

The Minister for Interior Ambrose Dery has announced during the week that all Members of Parliament will be given personal bodyguards to protect them.

Ambrose Dery speaking to the media after the meeting said plans are in place to improve security and there is a need to protect Members of Parliament.