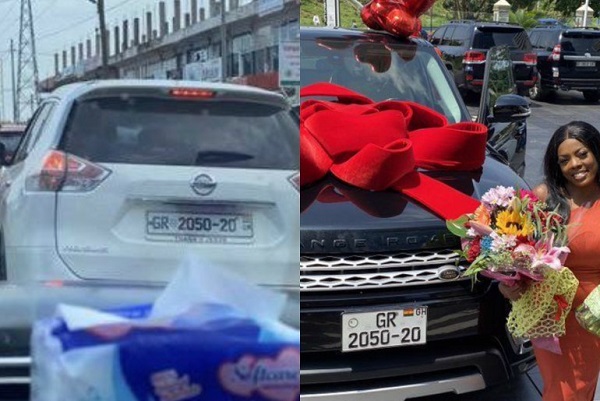 The Driver and Vehicle Licensing Authority (DVLA) has come out to clarify the issues surrounding two cars with the same registration numbers GR 2050-20.

Last week, a photograph surfaced when two cars one a white Nissan Rogue Sports Vehicle (SUV) and a Black Range Rover SUV which was said to be a gift to ace journalist Nana Aba Anamoah had same number plate.

This got many talking as to why two cars will have the same number plate and who is the actual owner of that registration number.

READ ALSO: Video: You think Ashaiman is for you? - Kelvyn Boy quizzes after being attacked by Stonebwoy's former bodyguard

The DVLA today June 23, 2020, in a statement, has clarified the issue, they made it known to the public that the Nissan Rogue SUV owns the said number and the one on the Range Rover is not captured in their system rendering it fake.

Portions of their statement read: "The Licensing Authority can confirm, that the white Nissan Rogue SUV has been registered and assigned with the registration number in consonance with the Road Traffic regulation. However, checks in the system indicate that the Black Range Rover is not registered."

The DVLA went on to say that they have commenced investigations into the matter. According to them, it is illegal for one number to be assigned to two different vehicles hence the decision to investigate and possibly get the perpetrators to face the law.

"We have consequently commenced investigation into the circumstance that led to the violation of the road traffic law in this case."

They, therefore, advised the ace broadcast journalist to visit their office to register the vehicle or face legal actions.

"We, however, urge the owner of the Range Rover SUV, to visit any of our offices to regularise the process for a genuine registration number plate".

Below is the statement. 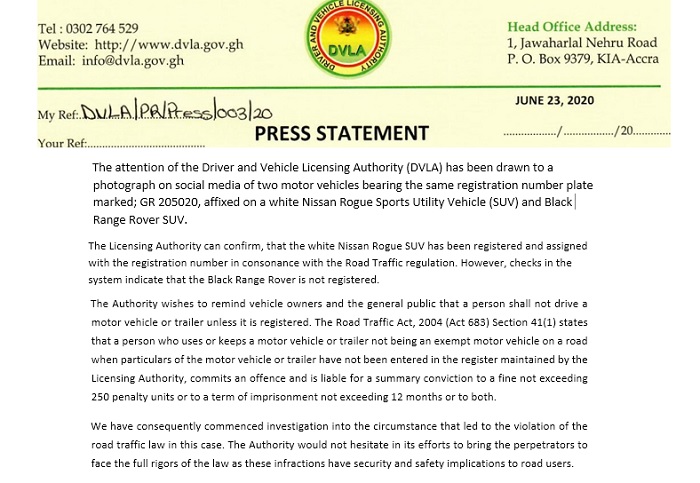