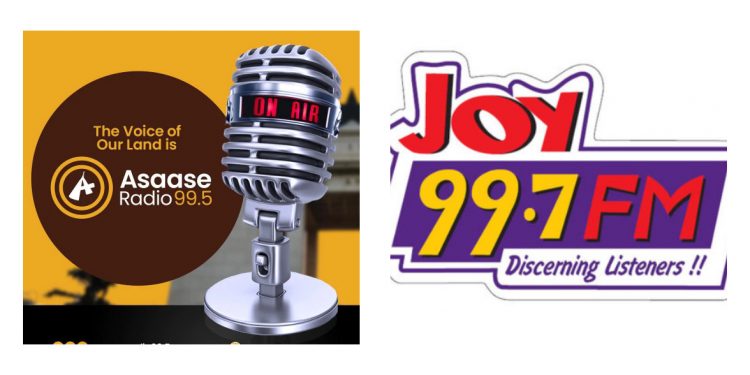 The National Communications Authority, NCA, has ordered Joy FM to fix their cavity filter rather than complaining of interference.

The NCA took up the matter and set up a team of investigators to look into the issue, they concluded that ABC Radio Limited, managers of Asaase Radio, 99.5FM are not causing any interference to Joy 99.7FM frequency.

According to the complainant, the interferences were occurring at Mataheko, Dansoman First Stop, Dansoman Akukor-Foto, Dansoman Control and Exhibition, Lapaz, Tabora, Pokuase-Mayera and Kwabenya-Abuom all in Accra.

But the report said “There was no interference recorded at the locations the monitoring was conducted; i.e. North Legon, Kwabenya-Abuom, Pokuase-Mayera, Tabora, Lapaz, Dansoman-Control and Exhibition, Dansoman First Stop, Dansoman Akukor-Foto and Mateheko”.

The NCA in the report said “it first conducted preliminary investigations into the reported interference on Thursday, June 18, 2020, in which no interference was observed on Joy FM’s assigned frequency of 99.7MHz. Joy FM further indicated that its listeners mostly complained of interference between the hours of 7:00am and 12:00pm on Saturdays.”

A follow up probe by the NCA’s team tasked to undertake further monitoring on Saturday 20th June, 2020, to ascertain Joy FM’s claim, also confirmed that no interference existed.

The reports of the investigative team has recommended that managers of Joy 99.7 FM should be directed to fix a stage-three Cavity Filter to ensure stability in their signals.

“Joy FM should be directed to install a three-stage cavity filter with a minimum attenuation of 40Db and maximum deviation of +75kHz.”

Cavity filters are the basic circuitry behind a Duplexer, and are sharply tuned resonant circuits that allow only certain frequencies to pass. This device prevents interferences on frequencies as long as FM stations operate within their permitted radius.

It added that “it conducted deviation measurements and recorded the live transmissions of Joy FM an Asaase Radio at the locations the exercise was conducted. In addition, for locations where either station had weak signals, the team measured only the field strength”.

The Report said ‘Live recordings from the areas monitored are available for verification”.

The team also found that, “Joy FM and Asaase Radio were not compliant with the maximum deviation limit of +75kHz at all the locations the exercise was conducted”.

The Report also said “Both Joy FM and Asaase Radio had weak signals at Pokuase-Mayera and Kwabenya-Abuom, whiles Joy FM, had a weak signal at Tabora, hence the team was unable to measure both stations’ maximum deviation”.

The investigative team in the process also identified and shut down an illegal radio station at Pokuase, operating on the frequency, 99.9MHz. It also found out that another FM station, Marhaba Radio 99.3 MHz, was causing adjacent channel interference on the frequency of Asaase Radio, 99.5MHz due to over modulation.

As a result, the team recommended that the three stations “Joy FM, Asaase Radio and Marhaba Radio, should be directed to ensure that their transmissions are confined within a minimum deviation of +75kHz during all periods of operation within 14-days, failing which sanctions shall be applied”.