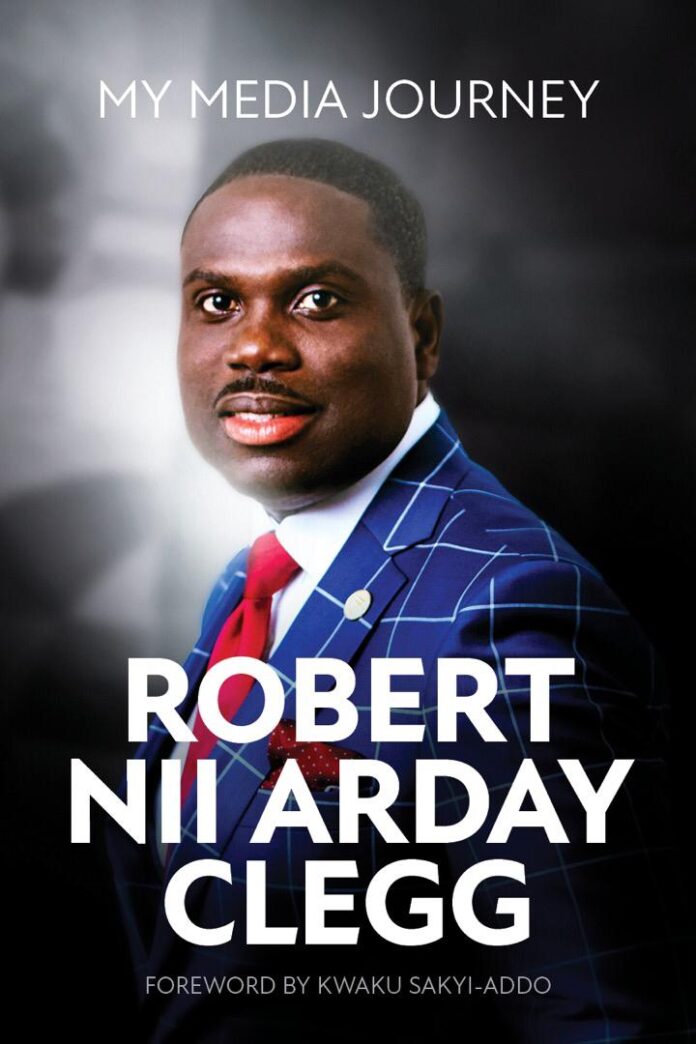 Robert Nii Arday Clegg, the Harvard Law School educated lawyer who garnered almost two decades of media experience in the past, launched his newest book, “My Media Journey” via Zoom and YouTube on Thursday, 11th February 2021.

With a print length of 300 pages, the book has eleven chapters spanning a 19-year period from the days of the Presidency of Jerry Rawlings to Nana Akufo-Addo. In that period, he transitioned from a university campus radio sports analyst to a leading commercial radio morning show host.

Kwaku Sakyi-Addo, the renowned journalist who authored the foreword to the book and also served as the chairperson for the function, described the book as, “candid, completely unencumbered by flattery or camouflage…a small chapter in a story that is still writing itself.”

In reviewing the book, Ace Ankomah, Senior Partner at Bentsi-Enchill, Letsa & Ankomah, described the book as “exciting and exhilarating.” He also described the author as unabashed and forthright, characteristics which to him, are certain to make readers wonder why Clegg did not edit out some of the revelations in the book.

Speaking from New York, the President of the Harvard Law School Association and Partner at Sullivan & Cromwell, Mr. Christopher Mann, described Clegg as one of the famous alumni of Harvard Law School who has achieved so much in so many different areas.

Speaking from California, Dan Tan, who taught Robert International Commercial Arbitration at Harvard, said Clegg was a remarkable and outstanding student, multi-talented, articulate and has all the hallmarks of a great lawyer. He added that he was surprised by how famous Robert was when in subsequent years, students especially from the African continent would always ask about Robert’s time at Harvard.

Michael Waks also joined in from California. Having served as Robert’s teaching assistant in Analytical Methods for Lawyers at Harvard, he said Robert will conquer anything that is put in front of him by his sheer drive, attitude and work ethic.

Dr. Tibisay Morgandi, a lecturer in International Energy Law at Queen Mary University of London School of Law and Robert’s classmate at Harvard, said, “Robert was an inspiration to all of us.” She said determination, charisma and integrity are three words that describe Robert well.

Dr. Jan-Michael Klett, another of Robert’s mates from Harvard, who joined in from Germany said “Tausendsassa” is a German word which best describes Robert who is multi-talented and capable of doing a thousand things.

Dr. Kwadwo Dakwa, a physician in North Carolina and a former Fellow and Assistant Professor at Yale University School of Medicine, joined in from North Carolina. He praised the author for his pragmatism, professionalism and analytical prowess.

David Dorfman a former Hollywood actor and a General Counsel at the U.S. Congress, though hard-pressed for time managed to join in from the Capitol in Washington DC to wish Robert who he met at Harvard, well.

Kelvin Kesse, who was the President of the Harvard Africa Law Association when Robert was a student at Harvard and who stayed on the same floor as Robert recounted how passionate Robert was about Ghanaian politics and football.

Michael Doumet, a practising lawyer in Paris, said he was honoured to have been a guest of Robert on the Morning Starr after the Paris attacks in 2015 and was grateful to Robert for the great lengths he went to attend his wedding in Lebanon.

Fredrik Bergman, who heads the Centre for Justice in Sweden was also delighted to have been Robert’s guest on Starr FM. He described Robert as a true gentleman, a scholar and a friend with whom he had explored Iceland during a mutual friend’s wedding.

Prof. Kwaku Nuamah of the American University in Washington DC who had been Robert’s teaching assistant at the University of Ghana, and who had read the book, described the author as brilliant, courageous, hardworking, a natural leader with a fighting spirit and clarity of thought that belies his young age.

Mena Eremutha-Arabambi, of the African Development Bank, and yet another of Clegg’s Harvard classmates, highlighted Clegg’s self-confidence and tendency to advance well-researched arguments.

Anas Aremeyaw Anas, the world-renowned investigative journalist cited Robert’s willingness to help with legal assignments when the former was pursuing law studies and recounted the tough interviews that he granted the author in the past.

Kimathi Kuenyehia another Harvard graduate and lawyer noted that by writing this book, his friend had moved from success to significance.

Benjamin Sackey of Akufo-Addo, Prempeh & Co. described Clegg as a man of deep knowledge, high intellectual acumen and blessed with an eidetic memory.

Winston Nelson, Robert’s classmate from Achimota, the University of Ghana, hockey teammate, and a personal and corporate financial adviser described the author as brilliant, energetic, argumentative and restless in a good way.

Patrice Amegashie, the author’s former colleague at Radio Gold called Clegg an intellectual warehouse who deserved to be an app.

The author was pleasantly surprised by the outpouring of kind words said to his hearing in his lifetime. His son Samuel of Ghana International School performed a piano recital, which was directed by his brothers David and Robert with support from their mother, Mabel Afua Yaba Clegg.

Kwami Sefa Kayi who was the MC for the event, announced that copies of the book can be obtained from booknook.store (online), Vidya (Osu and Labone), Legalities (Court Complex – Accra), X-Men (East-Legon), Uche Cooper (0557796247) and Amazon (worldwide).