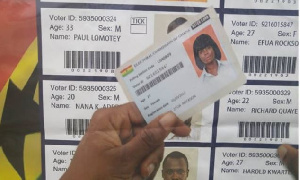 The old voters’ identity card is still valid for identification related to socio-economic transactions until the Electoral Commission (EC) finishes the compilation of the new voters’ register.

Samuel Tettey, Deputy Chairman in Charge of Operations at the Commission, said the EC usually shared data with the relevant institutions, including banks, to enable them to verify the authenticity of the cards presented to them as part of their transactions.

“As our major stakeholders, the Commission will communicate accordingly when the process is done and when the new card becomes operational,” he said.

“As soon as we are done with the ongoing registration and the register is compiled and legitimised by the Court, the old card becomes invalid.”

But until then, Mr Tettey explained that applicants who had successfully registered and received their cards could only use them to vouch for prospective applicants they knew as Ghanaians.

Some individuals had been presenting their new Voters’ ID cards to institutions to transact business and became frustrated when they were told they could not be accepted now.

An official at a bank located in the Ministries area, who pleaded on anonymity, said some clients had been presenting their new card as proof of their identity but the bank did not have the database yet to validate their authenticity.

He, therefore, advised clients to present other identifications cards which could be authenticated.