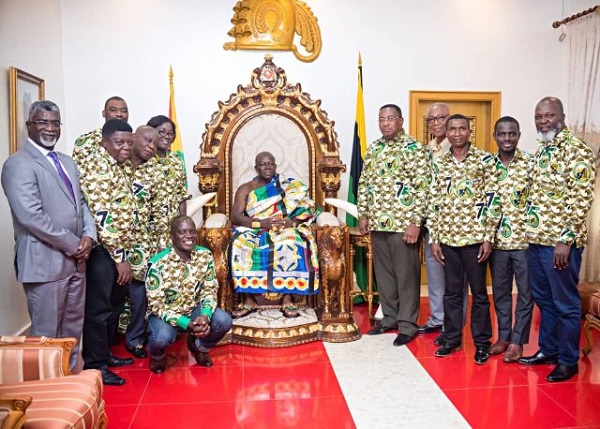 The Asantehene, Otumfuo Osei Tutu II, has been honoured by the Ghana Mineworkers Union.

The honour was in recognition for his role in ensuring the sustainability and survival of the mining industry.

The Union in a citation to the King acknowledged his vital role in reviving Anglogold Ashanti which was put under care and maintenance some 10 years ago. 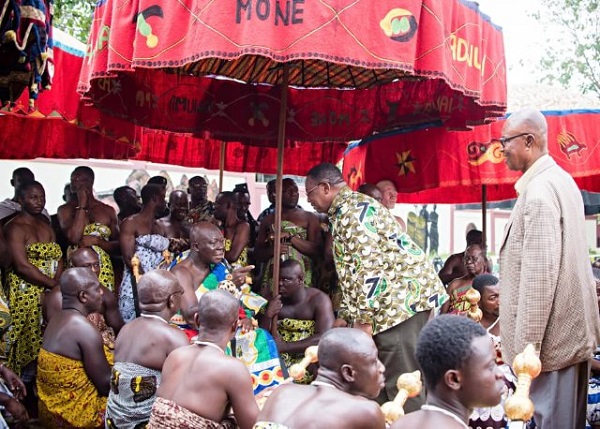 The plague of honour was presented to him while he sat in state at the Manhyia Place.

It had on it, inscriptions: “Your Majesty Otumfuo Osei Tutu II. The entire membership of the Ghana Mineworkers’ Union of TUC, with a cheerful heart, lift up the royal Horns to proclaim the unique wisdom you have always exhibited in handling matters relating to the mining industry.

“We are particularly grateful to you for your timely intervention that saved the Obuasi Mine from near-collapse in 2009.

“For this, we in the Ghana Mineworkers Union are proud to celebrate you. Otumfuo Ayekoo,”

The name of the symbol for Otumfuo’s Plaque “Opanin No Nie”, had two images of individuals with horns which they were blowing to signify appellations or praise for a job well done.

Speaking during the presentation, General Secretary of the Ghana Mineworkers Union, Prince William Ankrah, who brings his work to an end this year (after 28years of leading the union) thanked the Asante King for his immeasurable support especially during the trying days of Obuasi, when the town almost became a ghost town. 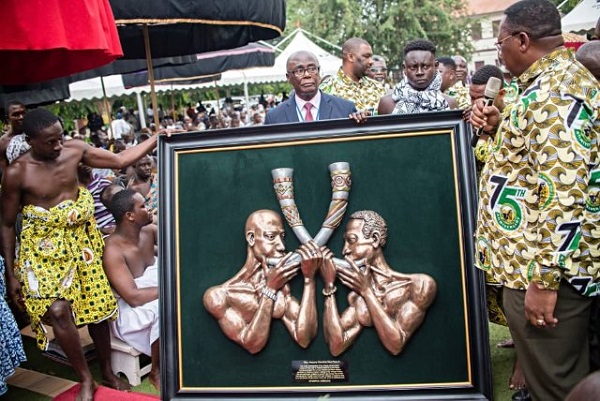 He praised the King’s contribution to ensuring that life was brought back to Obuasi with the return of Anglogold Ashanti, the largest mining firm in the town.

The mineworkers who are celebrating their 75th anniversary this year have in the last month been honouring all those who have played active roles for their return.

The first to be acknowledged for his contribution to the industry was former President Jerry John Rawlings. The former president while receiving the award charged Ghanaians to be responsible for the environment as the country continues to battle illegal mining. 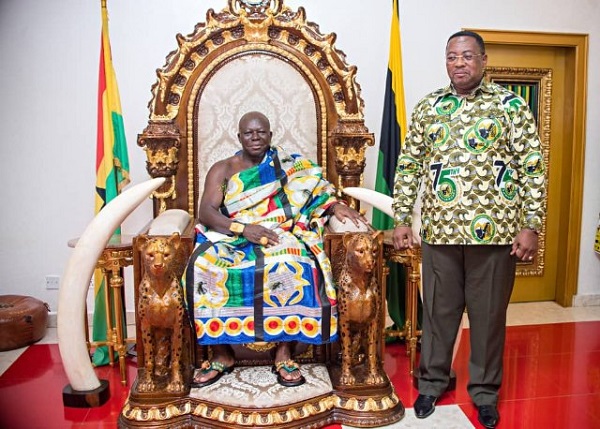 Mr Rawlings further urged the members of the Mine Workers Union to impact their communities, by becoming agents of change using the anniversary to perform deep introspection of what they can do for Ghana.

Another distinguished personality who was honoured by the union was former Chief Executive of AngloGold Ashanti, Sir Sam Jonah. He, during a dinner night organised on his behalf, urged the government to improve local content participation in the mining sector.

The mining expert in an interview with Joy Business said it was not laudable that indigenes in the sector cannot boast of at least 10% of the ownership of operations.

“If you take all the mining companies producing gold, Ghanaian ownership, apart from the Ghana government’s 10% which we as Minerals Commission insisted on, no Ghanaian has more than one percent or has even half percent and that has to be corrected otherwise there’s no ownership in the natural resource; it’s all owned by foreigners.”

Some individuals who have also been honoured by the union are Prof. Akilakpa Sawyer, former Vice-Chancellor of the University of Ghana Legon, who exhibited a distinctive repository of knowledge and wisdom during the preparation of the modern mining laws of Ghana. 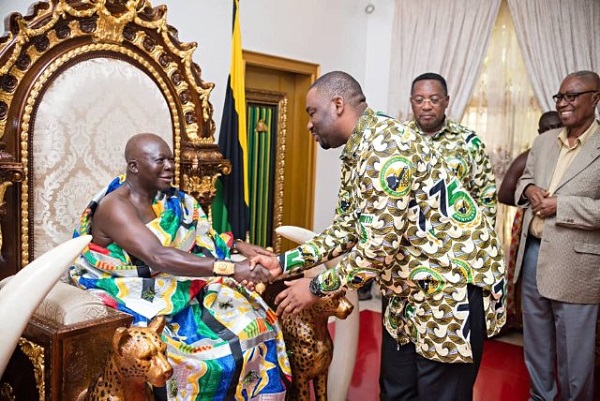 The rest are Mr. Sam Poku, former Executive Director, Ghana Chamber of Mines, who played a critical role in removing the hitherto adversarial union/management relationship within the mining industry, and Mr. Kofi Ansah, Founding Chief Executive of Minerals Commission, whose pioneering role in shaping the mining industry laid a strong foundation for the growth and development of the Minerals Commission.

Other personalities including Osagyefo Dr. Kwame Nkrumah as well as Comrades Dominic Forvie and Ebow Tawiah were also appreciated.