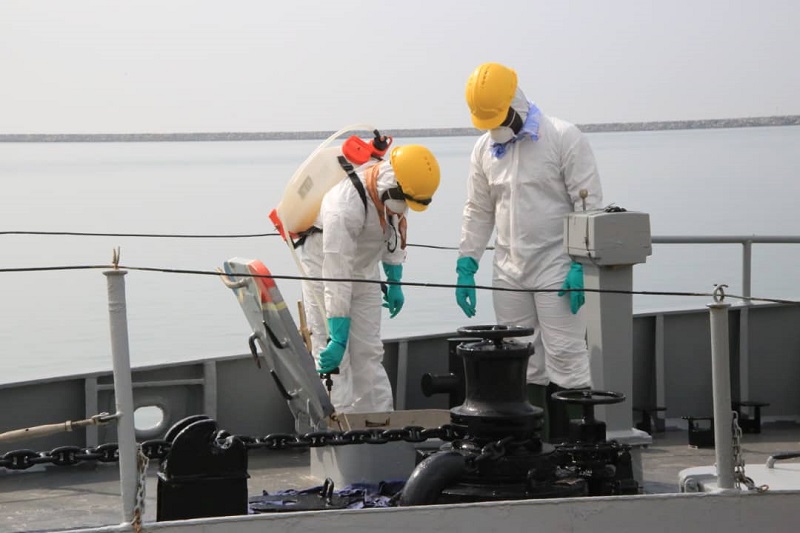 The Western Naval Command (Sekondi) of the Ghana Navy on Monday (May 25, 2020) benefited from Zoomlion Ghana Limited's voluntary disinfection exercise.

The exercise, which formed part of the company's corporate social responsibility (CSR), was targeted at containing the spread of the Covid-19 pandemic at the command.

This was after some officers of the Western Naval Command tested positive for COVID-19.

The number of infected personnel is yet to be publicly disclosed. 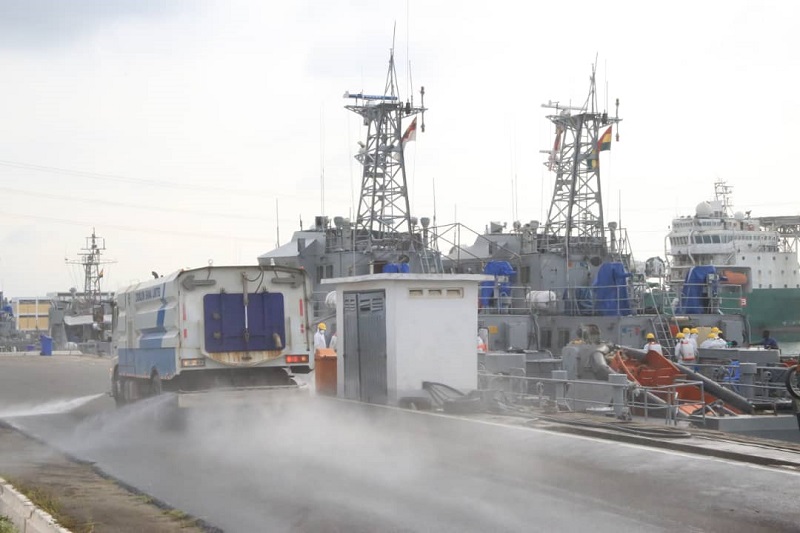 Over 100 Zoomlion personnel who took part in the exercise sprayed the commands barracks, and its various offices, while the mechanised sweeping machines disinfected open spaces and the entire environ.

In addition, about eight of the command's vessels were disinfected.

Sharing his observations after the exercise Commodore E.A. Kwafo, described the exercise as a "thorough" one.

He thus commended Zoomlion Ghana Limited for extending its free disinfection exercise to his command. 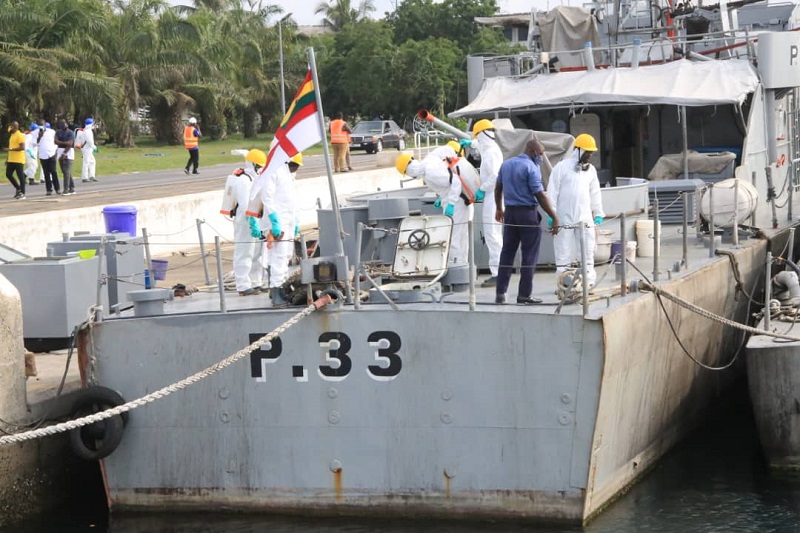 Early on Friday (May 22, 2020), Zoomlion disinfected the barracks, park and various offices of the Eastern Naval Command (Tema Naval Base) . Two navy ships at the Tema Harbour Berth 9— Gns eshworp.37 and Gns Bonsup.31— also benefited from the exercise.

“This whole exercise started via just a phone call from the general headquarters of the Ghana Armed Forces—just last weekend. And Zoomlion followed it up with a coordinating conference a couple of days ago,” he disclosed.

According to him, he was quite impressed when he received the operational instructions for the exercise. 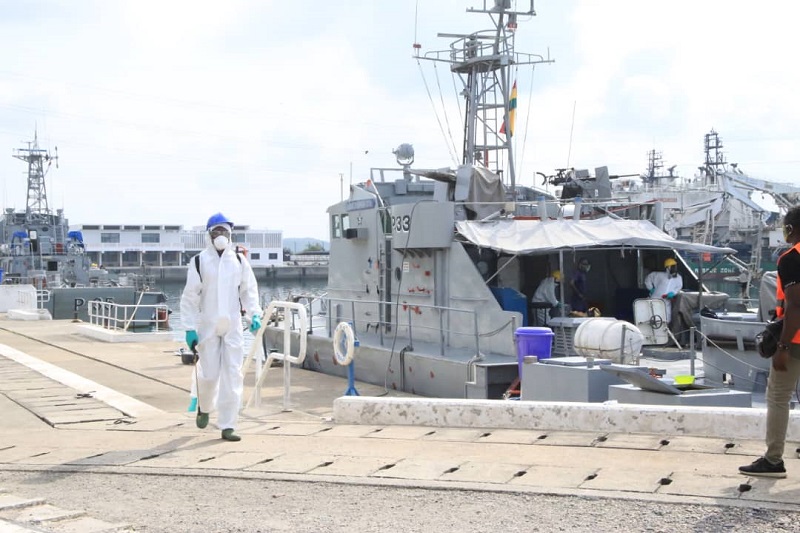 “They were here on time and carried out the exercise with military precision and professionalism, adding that “I have no doubt in my mind that they have some military background,” Commodore Walker indicated.

He said that personnel at the command were strictly observing all the COVID-19 protocols.

“So far, to God be the glory, we have not recorded any positive [Covid-19] case in the command,” he joyously expressed.
He recounted that some of his personnel were deployed during the partial lockdown period. 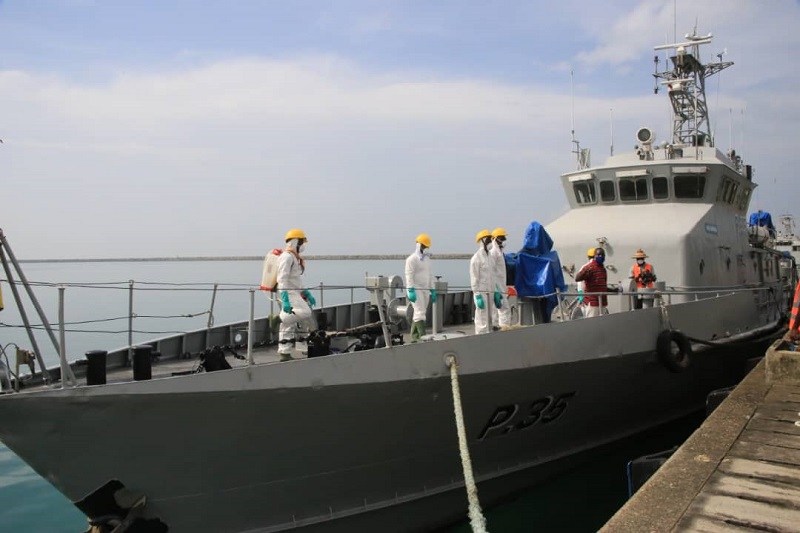 “We contributed troops as part of the operations and we supported the Southern Command for these operations, and after [it] our personnel were made to go through mandatory testing. And…..all of them came out clean,” he revealed.

Commodore Walker further noted the navy has deployed personnel along the country’s beaches to help enforce the COVID-19 safety protocols.

He gave an assurance that his command will not relent in its efforts to enforce the Covid-19 preventive protocols that have been instituted.

“We have deployed our personnel along the beaches, adding that for the Eastern Naval Command our area of responsibility stretches from Winneba-Aflao,” he said.

Thus, he said, his command has had interactions with the fisher-folks as well as the chiefs in these areas, indicating that the cooperation has been cordial so far.

However, he explained that because navy officers cannot patrol the beaches 24/7, they have given residents along the beaches special phone numbers to enable them report any person engaged in activities contrary to any of the safety protocols.

“We have also been working with the MCEs to enforce the protocols and carrying out patrols within the Tema metropolis. And of course, when you are coming to the base it is mandatory for every person, irrespective of your background, to wear nose mask and go through the protocols before you enter this place,” Commodore Walker averred.

On her part, the National Coordinator for the Zoomlion Disinfection Exercise, Lola Asiseh Ashitey, disclosed that after the Eastern Naval Command, her outfit will move to the Western Command, Takoradi, and disinfect there too, adding that eight more navy ships will also be disinfected.

She assured that Zoomlion Ghana Limited will stop at nothing to render its services to the country.