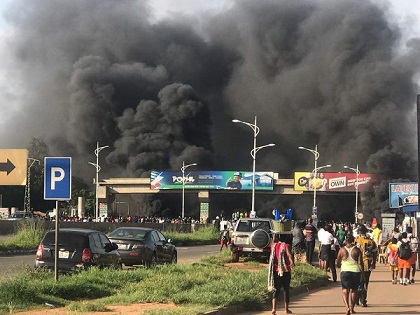 The Ghana Police Service has revealed that they have arrested the driver who allegedly knocked down a student of the West Africa Senior High School (WASS) on the N4 Highway.


The 22-year old student of the West Africa Senior High School (WASS) died after the accident, sparking violent riots which led to a temporary blockage of the highway.

The Police issued a statement that effect.

The statement also revealed that a media centre for the cross-checking of facts regarding the protest has been set up at the Adenta Police Station.

The Police also discounted assertions that it used excessive force in restoring calm to the area after a 14-year-old boy sustained a suspected gunshot wound in the incident.

According to them, preliminary investigations into yesterday’s rioting show that Police employed the appropriate riot control methods.

"Preliminary investigations into yesterday’s rioting show that Police employed the appropriate riot control methods. However, in the process, a boy of fourteen years was injured and was treated and discharged at the Nyaho Clinic in Accra. There is no record of any other injuries related to the riot control," the statement explained.

The statement appealed to the public to supply them with images or videos related to yesterday’s rioting and its control on Police WhatsApp number 020-663-9121.