Police interdicts officer who was arrested for brandishing weapon 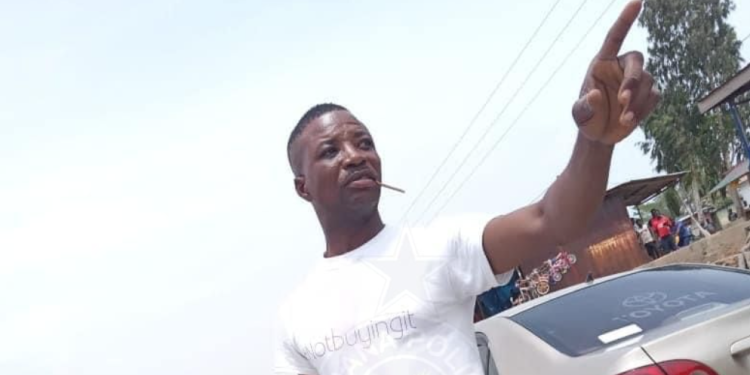 Ghana Police Service has interdicted the officer seen in a viral video brandishing a gun.

The Police Service in a statement on Monday, the police said, after immediately retrieving the weapon from the officer, it has now interdicted him to allow a detailed probe into the incident.

The video showed the ununiformed officer in a heated confrontation with another man on the road.

The officer during the altercation hit the civilian twice while brandishing his weapon.

The officer is alleged to have indicated that he pulled out his pistol after he was attacked with a cutlass.

The police, in its statement, said the officer lodged a complaint of assault against his assailants.

Update on Police arrest and retrieval of weapon from perceived gunman

The attention of the Police Service was drawn to a video in which a person wielding a pistol was captured engaged in an argument and a subsequent fight with another person.

Police immediately commenced investigation into the incident, resulting in the arrest of the person and subsequent retrieval of the weapon.

Preliminary findings show that the person who was seen wielding the weapon is a police Sergeant stationed at the Central Regional Police Command. The said policeman has been interdicted to make way for a full investigation into the matter.

Investigation further indicates that the Police Sgt. lodged a complaint of assault against his assailants, alleging that he was attacked by a group of persons, one of whom was wielding a cutlass.

Both parties are assisting police investigations.

We would like to assure the public that justice will be served.