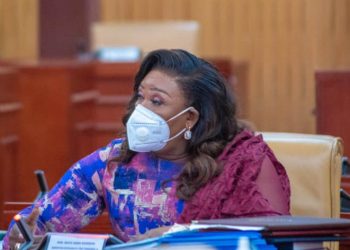 The Vice President of policy think tank, IMANI Africa, Kofi Bentil, says he hopes that Ministerial nominees who did not perform well at the vetting will be rejected.

His comments come on the back of some backlashes that some of the nominees being vetted have received especially Minister-designate for Fisheries and Aquaculture Development Ministry, Mavis Hawa Koomson.

Many of these nominees have not displayed in-depth knowledge of issues according to sections of the public.

READ ALSO: Mastery of Ga and Twi will serve you a better purpose as Fisheries Minister than English - Dr Adusei

Mr Bentil speaking on Joy FM's Newsfile on February 20, 2021, said those who showed capacity and competence in handling the sector they were assigned to.

"You can see from the attitude of some of these nominees, there were times they got angry and irritated and throwing answers back to members of the panel. Dr Akoto Afriyie was one of them, those asking the questions are being asked on behalf of the citizens. I do have a hope that some people will be rejected and it has happened in our history before".

Mr Bentil also argued that questions must be given to Ministerial nominees ahead of vetting so they prepare adequately.

Mr Bentil speaking on Joy FM's Newsfile says he would rather suggest nominees are given questions ahead of the vetting so they prepare adequately.

"I was happy with Kojo Oppong Nkrumah and you could see he was on top of issues, the issue here is not even about proficiency in English, it is about competence. The process is fine. We have been using this process since the fourth republic started. The only thing that we need to do is to give the people who are going to be vetted the questions ahead so that they are well prepared".

Meanwhile, the Ghana Tuna Association have moved quickly to petition the Speaker of Parliament Alban Bagbin over Hawa Koomson's performance.

The Tuna Association feels the nominee is not capable of running the Fisheries and Aquaculture Development Ministry.