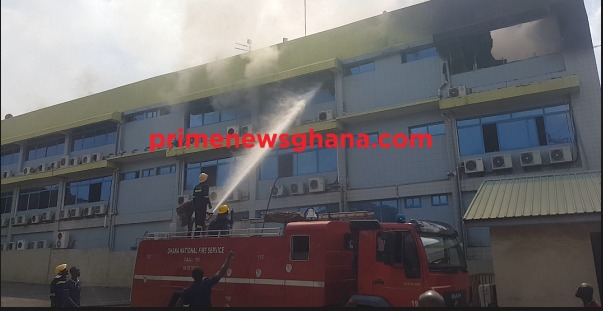 The Ghana Revenue Authority (GRA) has put up a business continuity plan after fire raged its head office annex near the Kwame Nkrumah Interchange.

The fire is said to have started around 8 am and Fire Service personnel had to battle with it for hours.

The GRA says business will continue but it will not be at the circle office where fire gutted.

The Acting Commissioner General of the Ghana Revenue Authority Amishadai Owusu Amoah who addressed the media put out their contingency and disaster recovery plan in place.

These are the two most affected, we as GRA have a disaster recovery plan or a business continuity plan, so that is what we have activated.

"If you want to conduct business with us tomorrow as a large taxpayer, you have to come to our head office, where we call the Kinbu office at Accra Central, but if you are a medium tax payer you will be served at Adabraka small tax payer office close to Adabraka Police Station."

"We do not know the number of documents burnt but we operate a system where we have backups".

Some four persons sustained various degrees of injuries when trying to quench the raging fire.

They are all personnel of the Ghana National Fire Service. An official of the Ghana Red Cross said three of the injuries are minor but one person is severely injured and has been transferred to the hospital.

Prof Stephen Adei, who is the Board Chairman of the GRA, was at the scene but declined to speak to the media.