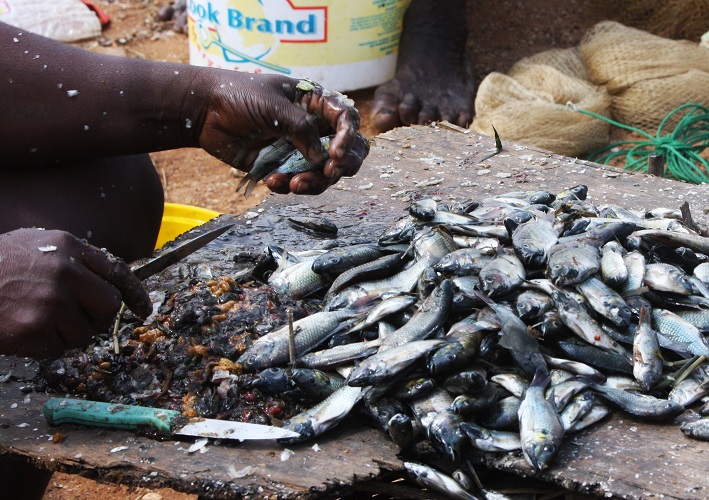 In a farming community near Elmina in the Central Region, precisely Bantuma a fishmonger has been banished for refusing to pay fines imposed on her by the Edina Traditional Council and the Bantuma Fishmongers Association.

The fishmonger, Ms. Margaret Akuvi Akoto aged 40 dissatisfied with the action by the council and association petitioned the Commission on Human Rights and Administrative Justice (CHRAJ) to look into the matter.

According to the Komenda-Edina-Eguafo-Abrem (KEEA) Municipal Director of CHRAJ, Mr. Richmond Mensah, the commission had scheduled to hear the matter on April 30, 2019.

The Komenda-Edina-Eguafo-Abrem (KEEA) Municipal Director of CHRAJ, Mr. Mensah elaborating on the petition by the fishmonger said in March this year, the Bantuma Fishmongers Association, of which Margaret was a member, decided to regulate the supply of smoked fish from Bantuma to Keta and the Denu markets in the Volta Region to avoid excessive supply of smoked fish.

According to him, per the petition, the association sought to regulate the supply by asking the fishmongers to sell smoked fish meant for the two markets on a rotational basis.

However, he said, Ms. Akoto, who claimed she had not been at the meeting where the decision was taken by the association, allegedly defied the order and sent her fish to the market.

For defying the directive of the association, Mr. Mensah said, she was slapped with a fine, which she refused to pay. Her defiance incurred the displeasure of the association, for which reason it dragged her to Nana Kodwo Condua VI, the Omanhen of the Edina Traditional Area.

After deliberating on the matter, the chief too imposed another fine on Ms. Akoto, but there again, she refused to pay. Irritated by her refusal to pay the fine, the traditional authority banished her from the fishing community.

Apparently worried by the action of the traditional authority, Ms. Akoto petitioned CHRAJ to investigate the matter. Mr Mensah also expressed concern over the worrying cases of child neglect and property rights of spouses which were on the increase in the municipality.

The situation, he said, was affecting development in the area, adding that “the youth, who should be educated to contribute to society, have become ‘ghetto boys’ and engage in anti-social practices”.

The deviants, he said, lived along the seashore and enticed young girls of 10-13 years into prostitution and other unhealthy practices.

He urged parents to take responsibility for their children, saying that “children are your assets and the future”.