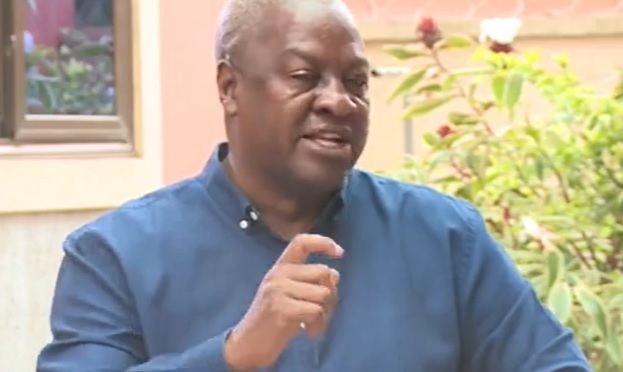 Former President John Mahama says Ghanaians are aware that he is more credible than President Akufo-Addo.

Mahama was speaking on TV XYZ in an interview on September 20, 2020.

READ ALSO: Video: Dr Bawumia hits back at Mahama over 'God save us' comment

“Ghanaians know what my track record is; my opponent comes nowhere near me. When we talk about credibility; who is more credible when it comes to delivery on social infrastructure, everyone knows who is credible.

“He (President Akufo-Addo) should show me one secondary school he has built or one hospital he has built in four years. It is easy to say that we have better credibility when it comes to infrastructure with our opponent,”

The former President on tour in the Bono East Region said God is not so wicked to give Ghanaians another four years of Nana Akufo-Addo.

Dr Bawumia replied Mahama on Twitter and said: "God has already saved us from you," Bawumia tweeted and accompanied his tweet with a video of Mahama's comment.

Mahama is continuing his national tour and was on Friday installed as the Nkosouhene (Development Chief) of the Apesika Traditional area in the Kintampo South constituency of the Bono East region.

Under the stool name Nana Beyeman Kwame Ababio I, Mr. Mahama was taken through the customary rites by the Chief of Jema and Kyidomhene of the Nkoranza Traditional Council, Nana Amponsah Gyan II.

Nana Amponsah Gyan II explained that the NDC presidential candidate deserves to be honoured as he undertook massive development projects in the area when he was the President of Ghana.

Nana Amponsah Gyan, therefore, urged his people to return the NDC to power by voting for Mr Mahama in the December 7 presidential election to enable him continue from where he left in 2016.

He has promised to improve the lives of the people in the region when voted into power in the December polls.