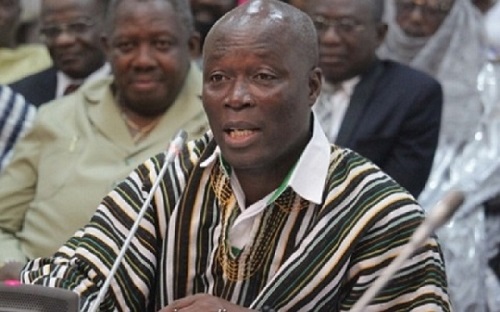 Former Deputy Minister for Local Government Nii Lante Vanderpuye says the intention of the Vice President Dr. Bawumia to digitize the distribution process of premix fuel will not solve the corruption in the sector.

Nii Lante Vanderpuye in an interview with Citi FM said there is a need to get trusted people to distribute the premix fuel than trying to digitize the process which will not yield any positive result.

"As for him, I think when he started hearing the word digital he didn't hear anything again, the real issue of the premix is the smuggling of the premix fuel and diversion of the premix fuel, you and I were in this country when we heard 21 million Cedis worth of premix have been diverted, look at the real issue and stop baffling us with the issue of digitisation it won't solve anything, if you digitize and still human beings are the one to input figures and if that person is corrupt the person is corrupt, the person will input 1,000 gallon when the person actually distributed 200 gallons what is the backup to check all these things, his fixation with digitization is good the world has gone high tech corruption in premix fuel distribution that one too we need digitization?"

Dr. Bawumia has last week said the digitization agenda of the government will soon be extended to the distribution of premix fuel in Ghana in order to increase the efficiency of its delivery to fishermen.

According to Dr. Bawumia, introducing digital technologies in premix distribution would ensure that the fisherfolk, for whom the product is subsidized and provided for, actually get it.

“We have to increasingly leverage the digital technologies that are available to increase efficiency in the downstream petroleum sector. One of the areas that we have been discussing and have taken a decision on is, for example, the distribution of premix fuel in Ghana amongst the fishermen,” Vice President Bawumia disclosed.

“This is an area that has really been a challenging one because there are subsidies to premix fuel, and whenever there are subsidies, the distribution of the product tends to create economic rents, and when it creates these rents all sorts of people come in the middle and the fishermen, for whom this is designed, ultimately don't even get the product because the products are smuggled and sold to other people who may not even be fishermen at higher prices.

“So we've been looking at this issue and we've decided that the best way to deal with this is to digitize the process so that we can direct the subsidy to each boat that is registered. We’ve registered all the boats and we will implement a digitization process in the distribution of premix in Ghana soon, and we hope to extend it also to fertilizer in the next year as well. Digitization will also end the politicization of premix distribution.”