GhanaAt62: There should be no room for violence in politics-Akufo Addo 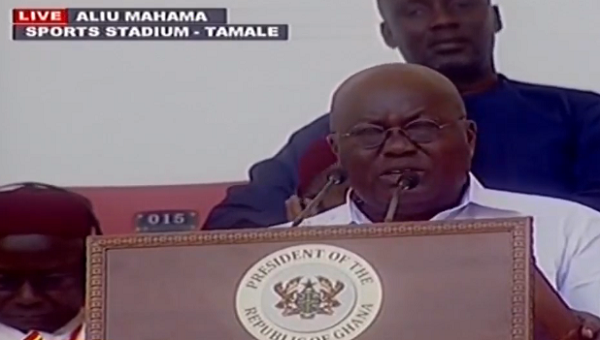 President Akufo Addo has asked political parties to take steps to eradicate the growing trend of political vigilantism in the country.

According to him, there should be no room for violence in our body politics, addressing Ghanaians in Tamale during the 62nd Independence Day anniversary parade, President Akufo Addo said: "the other institution that has been a source of friction for our society is politics, we the leaders of the political parties have a great responsibility to set a proper tone for political discourse in our country, for years a deliberate campaign was waged in this country to give competitive politics a bad name to justify military or authoritarian rule, competitive politics was said to be divisive, antagonistic and corrupt, we learn from painful experience."

"It took a long time for a consensus to emerge that indeed and we all agree that the form of governance within which we want to conduct our affair should be a multiparty democracy, which under the constitution of the fourth republic has provided us with the longest period of stable governance in our history, under a multiparty democracy there will necessarily be a divergence of opinions, indeed democracy strives on debate, passion, on argument and sometimes even on unraised voices,"he added.

Speaking on the issue of election violence, President Akufo Addo said the focus of the country should be on providing quality education for the next generation and also jobs for them which will be used to measure the success of the country.

"The people of Ghana do not deserve to be toiled with, in such a reckless manner, the very concept of political violence is offensive and shame us all who are in politics," President Akufo Addo advises.

President Akufo Addo during the 2019 State of the Nation Address called on the two main political parties, NPP and NDC, to meet and find a solution to the issue of political vigilantism.

His call on the two parties comes on the back of the recent violence recorded during the Ayawaso West Wuogon by-election, which left 13 people injured.

A commission of inquiry was later set-up by the president to probe the incident and make recommendations for further action.