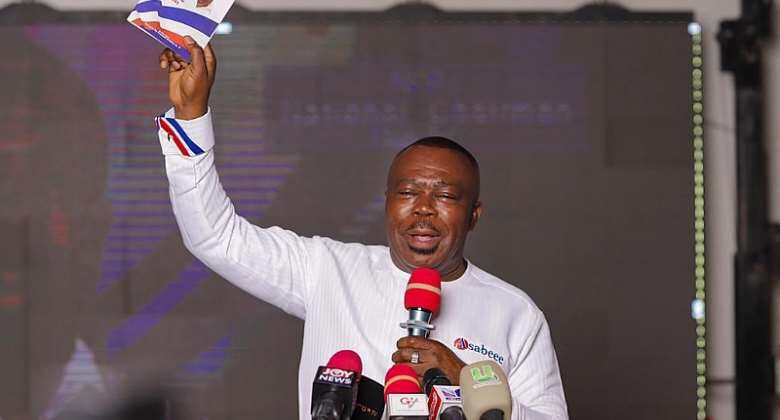 A National Chairman hopeful of the New Patriotic Party (NPP), Stephen Asamoah Boateng, has described himself as the ‘right field commander’ to lead the party to another victory in national elections in 2024.

Speaking at his campaign launch in Accra, the former Mfantseman Constituency Mmember of Parliament (MP) said he is got the right experience and character to lead the party to maintain power and break the eight.

“The battle in 2024 is not child’s play; it is tough. We have the National Democratic Congress (NDC) as a strong contender; and if you have such an opponent, you take them on from armchair approach at our peril.

“We do not need a tie-wearing chairman but a field commander; which I offer you,” he said.

Asabee who is also a former Director-General of the State Interest and Governance Authority (SIGA) was supported at the launch by constituency executives of the NPP most of whom came from his home constituency.

He further outlined a seven point agenda which he said will form the basis of his leadership if he wins power in the impending NPP National Executive Elections.

Key amonsgst them, he said will be the 60:40 agenda which will allow party members to have a greater say in the appointment of people to occupy positions in government.

“Asabee intends to vigorously pursue the agenda 60:40 whereby the party negotiates 40 per cent of political appointments to go to the rank and file with the 60 per cent going to the President and his core team,” he said.

The seven points included unifying the party, strengthening party structures, building the finances of the party at all levels, ensuring that 40 per cent of appointments go to the grassroots, building welfare system for the party and ensuring women and youth empowerment.

Touching on party unity, the former Mfantseman West Member of Parliament (MP) described himself as “the magnet whose humility, fortrightness, boldness, high energy and organisational ability” would attract people of various backgrounds to work for the party