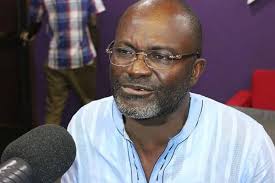 The member of parliament for Assin Central on the ticket of the New Patriotic Party (NPP) Kennedy Agyapong has stated that the National Chairman of the National Democratic Congress (NDC), Kofi Portuphy should not be allowed to go scot-free following his comments that NDC members and sympathizers should defend themselves if attacked by NPP supporters.

There have been pockets of violence after the 2016 general elections as individuals who are alleged to be NPP supporters have launched attacks on state properties and some members and sympathisers of the NDC.

In reaction to the post-election violence, Mr Portuphy called on supporters to defend themselves if they were attacked by rampaging supporters of the NPP.

But in an interview with Joy News, the Assin Central MP who felt Mr Portuphy was inciting his party's supporters to violence said the NDC chairman will be the first to fall if there is violence.

"If he tries anything, I will give one command and he will be the first person to go down. That one I assure him.”

"Yesterday, for instance, I went on air to condemn what the guys did at the toll booth. I am surprised the NDC chairman came out with such press conference", he added.

"He cannot cause riot and go scot free”, he charged.