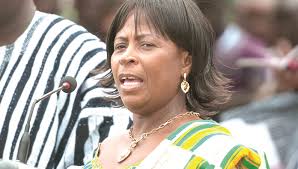 The outgoing Minister of State at the Presidency in charge of Social and Allied Institutions was selected by the MP’s to assume the position which would be headed by Asawase MP Mohammed Muntaka Mubarak who was maintained as Chief Whip with Ahmed Ibrahim, MP for Banda as the First Deputy Minority Chief Whip.

Mrs. Cudjoe-Ghansah was re-elected to go to Parliament for the National Democratic Congress (NDC) after keenly contested general elections which saw most of the NDC MP’s losing their seats.

Cudjoe-Ghansah was on the committees for gender and children, and on foreign affairs and one of her major activities was meeting with the Chinese Ambassador to Ghana in 2014 later to discuss joint working on health and the wellbeing of children.

In 2016, she presented computers on behalf of the government to the head of the Ghanaian civil service and over 500 desks to schools within her constituency.

She is married with six children and a Christian who played a leading role in bringing religious cohesiveness and peace to the area and the country at large.

She is expected to use her new role to help his party especially in criticizing the new government and ensuring that the party regains power.