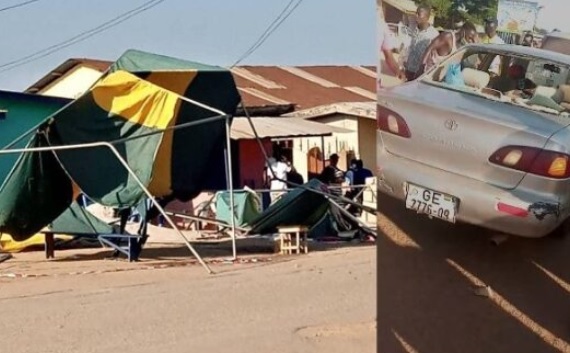 The National Democratic Congress ( NDC) is demanding the arrest and prosecution of thugs who caused chaos at a registration centre at Ajumako in the Centra Region.

The Central Regional branch of the NDC held a press conference on August 6, 2020, and called on the police to be swift in their investigation as the party accused the NPP Parliamentary candidate Dr Rashid Kwesi Etuaful and his bodyguards of masterminding the attacks.

Narrating what led to the disturbance on August 5, 2020, Joy News’ Richard Kwadwo Nyarko said Dr Rashid Kwesi Etuaful had information that people largely foreigners were being bused by the opposition National Democratic Congress (NDC) to some polling stations to register.

The bodyguards then stormed a registration centre, ransacked the materials, pulled down canopies, and vandalised some cars packed around.

The chaos led to an abrupt suspension of the registration process since Electoral Commission officials and the applicants at the centre ran for their lives.

A joint intervention of the military and police restored law and order an hour after the disturbance and the registration exercise continued.

The five injured persons are still receiving treatment at the Ajumako Government Hospital.

Meanwhile, the Ajumako Police Commander is to brief the media about the incident and processes undertaken so far.