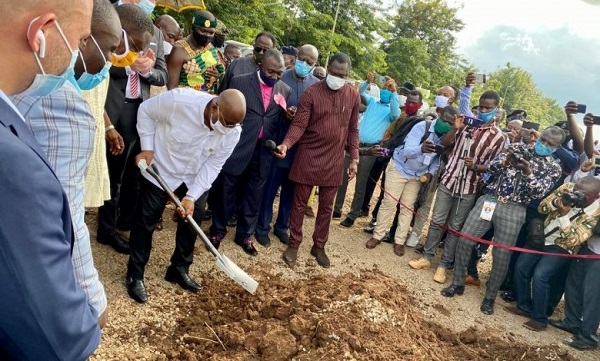 The National Democratic Congress (NDC) says the New Patriotic Party (NPP) is trying to use their numerous sod-cutting events to deceive the people of Eastern Region.

Addressing the press at the proposed site for the remodelling of Enyiresi Hospital, the Regional Communications Officer of the NDC, Darlas Ampomah Williams, said the New Patriotic Party (NPP) has performed abysmally in the home region of the President in the area of health.

According to him, the various health projects which the President has cut the sod for during his working visit to the region are yet to see any significant construction activity.

Darlas Ampomah Williams stated that the NDC is concerned because the sod-cutting events have become too rampant.

“The NDC like other well-meaning Ghanaians have noted a major concern related to the rampant and indiscriminate sod-cutting events being organized by the failed Akufo-Addo and NPP government without an established source of funding to hoodwink the unsuspecting Ghanaian electorate to believe that they have something to show for the over 370 billion that has become available to them so far. We would like to address you on the sakawa sod-cutting ceremonies that Akufo-Addo performed.”

“During his visit to the Eastern Region, the various health infrastructure have seen no work since he exited the region. Nana Akufo-Addo cut the sod for the construction of the following; the Eastern Regional Hospital in Koforidua, Atiwa West District hospital, upgrade of the clinic to polyclinic in Akwatia,” he added.

The flagbearer of the National Democratic Congress (NDC), John Dramani Mahama in September 2020 called on chiefs to critically scrutinise promises the government has been making to them ahead of the 2020 general elections.

Mr. Mahama wants chiefs to ask during sod-cutting ceremonies if such projects have been captured by government in the 2020 budget.

“Lately, the President and his Vice have been going round to cut the sod for various projects without having contractors on site. They only bring the equipment to the site just for the sod-cutting ceremony and return them when the President leaves. So it is just for deception. It is sakawa. It is 419,” he said.